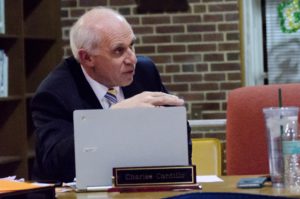 Published by the Manhasset Times on April 11, 2017

Cardillo, who is retiring this June, cited the district’s efforts to widely disseminate information about the budget over the past four weeks as a reason for the lack of attendance at the hearing, held during the school board’s 25-minute meeting.

The proposed budget totals $93.91 million, an increase of about $1.9 million from the 2016-17 school year, and does not exceed the 2.02 percent increase to revenue from property taxes that the district is allowed this year under the state’s tax cap law.

Cardillo said the budget is “in good shape” going into the public vote on Tuesday, May 16.

According to a press release published by the New York State School Boards Association, 98.5 percent of school board budgets passed last year. Cardillo said he expects Manhasset’s will pass this year.

Parents’ biggest concern about the school budget each year, Cardillo said, is whether the district is able to continue offering the same level of programming and education. Therefore, he said, his goal is to “maintain and enhance” academics, arts, athletics and activities within the school district.

If his proposed budget passes, class sizes at the elementary and secondary levels will be sustained and there will be several additions to students’ educational experience, Cardillo said.

A high school physical education course focusing on “cooperative and trust-building activities” would be added, he said, as well as two additional art courses in animation and digital photography and four new half-year science electives — anatomy and physiology, marine biology, science of natural disasters and criminalistics.

In an effort to expand the district’s Chromebook laptop computer initiative, the budget calls for the purchase of 525 new Chromebooks for third, fourth and fifth graders in Munsey Park and Shelter Rock schools.

Funds are also to be allocated for three new clubs at Manhasset High School and new assistant coaches as needed.

The Manhasset Times published this piece in print on Friday, April 14, 2017.

The school board is scheduled to vote to adopt the budget at a meeting on Thursday, April 20, at 8 p.m. at the Manhasset Middle School library.

Also at the meeting Thursday night, the board agreed to apply for a waiver with New York State to opt out of the school breakfast program, which provides a free or reduced-cost meal to elementary school children as dictated by financial need. Manhasset school district has received waivers each school year from 1995-96 through 2016-17.

The board also approved a resolution agreeing to terms and conditions included in a confidential settlement between the district and an unnamed employee.