$38.5B budget passes; courts get same amount as last year 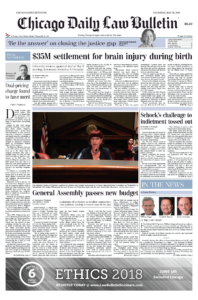 The Chicago Daily Law Bulletin published this piece in print on Thursday, May 31, 2018. The jump is below.

Published by the Chicago Daily Law Bulletin on May 31, 2018

SPRINGFIELD — Illinois lawmakers on both sides of the aisle passed a budget Thursday that they say is balanced and won’t raise taxes. However, the courts won’t see a funding increase despite requests from the chief justice.

It passed the Senate Wednesday 56-2 and the House today 97-18 — clearing both chambers before the voting threshold would increase from a simple majority to a three-fifths majority on June 1.

The $38.5 billion plan doesn’t contain new taxes, however it is dependent upon the billions of dollars in extra revenue coming into the state as a result of last July’s personal income tax hike of 4.95 percent and corporate income tax of 7 percent. It also includes federal funds and other income to make the total budget roughly $80.2 billion. 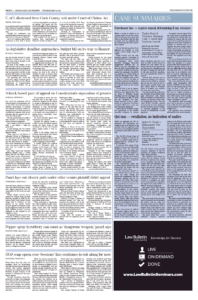 The Supreme Court is set to receive $344.8 million from the state’s checkbook under the Senate’s amendment to House Bill 109.

Chief Justice Lloyd Karmeier petitioned the General Assembly for $410.6 million, which would have been nearly a 20 percent increase in resources. He said the hike is needed to continue probation reimbursements and the e-filing initiative.

In a statement today, Karmeier said “while the court is cognizant” of Illinois’ fiscal situation, the judicial branch only comprises of 1 percent of the overall budget. He said cost increases make the proposed allocation “unsustainable.”

“When I said that the [c]ourt was ‘fighting to keep the lights on,’ I was not exaggerating,” he said in the written statement. “Frankly, this appropriation to the Judicial Branch would make the challenge even more difficult.”

Karmeier also said he is “especially concerned” about the detrimental impact on probation-related services, which is a “cost-effective component of our criminal justice system.”

State law and a high court ruling mandated salaries and activities of the judiciary had to continue throughout the budget impasse, staying the Supreme Court’s budget at its fiscal year 2015 level. And the law also dictates that unless lawmakers specifically allocate fewer funds for judicial salaries, those expenses are not to be reduced.

Karmeier acknowledged in April that the 1992 law making cost-of-living adjustments to judges’ salaries and the subsequent 2004 decision in Jorgensen v. Blagojevich “may be unfortunate.”

During the Senate’s budget discussion Wednesday night, Chicago Democrat Heather Steans touted that the budget “truly does balance” — which hasn’t always been the case with previous budgets.

“This has certainly been the first time since I’ve been an appropriation chair where I feel like it has really come together as a true bipartisan effort,” Steans said. “I don’t think anybody would say it’s ideal and exactly what they wanted — but that’s the nature of compromise.”

Republican House Leader Rep. Jim Durkin echoed Steans praise, saying he has been waiting to pass a fair and balanced budget for years.

“When we respect both sides, we can accomplish great things,” Durkin, of Western Springs, said. “I’m very proud to say we have accomplished a framework that we can use moving forward to reach bipartisan compromise on almost every issue that is brought to the General Assembly.

As part of the budget, an additional $350 million will go toward K-12 education which is required by the revised school funding formula that was enacted in the fall. It also includes $50 million of extra funds for early childhood education.

The spending plan funds the governor’s capital program which includes $2.5 billion for the Illinois Department of Transportation. Additionally, $53 million will go toward renovating the Quincy veterans’ home and $172 million to the President Barack Obama presidential library.

Also included is about $1.3 billion in supplemental spending for the current fiscal year that was accrued when the budget didn’t pass on time last year.

Currently, 10 percent of the state income tax that is for cities is withheld in order to balance state spending. Under the new budget, only 5 percent will be withheld.

People who are vested in the pension system funded by the state but are no longer working would be permitted to get a cash payment if they give up their future pension benefits. This is estimated to save the state about $41 million.

The state will also offer employees of the Tier 1 pension plan the option of a cash payment if they give up their future 3 percent compounded annual raise in pension benefits. Lawmakers expect the savings will be about $381 million.

The budget also includes a critical access rate for pharmacies which is intended to make sure independently owned pharmacies receive adequate rates from Medicaid to cover costs. However, a Medicaid rate reduction Gov. Bruce Rauner proposed is not part of the plan.

“This budget helps restore stability in Illinois, which is what we need,” Democratic Senate President John Cullerton said in a statement. “There remains more work to do, but this is a bipartisan accomplishment that we can hopefully build upon.”

Here is an extended version of the Supreme Court’s budget piece.

SPRINGFIELD — State senators last night successfully pushed forward a budget plan they called an “impressive display” of bipartisanship and a “responsible,” balanced compromise that does not include any new tax increases.

It includes new money for all levels of education after a session stressing the need for more equitable funding. Some human services also receive a boost. And it provides for mostly level funding for state agencies.

If state representatives in the House agree to the budget framework in a vote expected tonight, Illinois courts will receive the same allocation for the fourth straight fiscal year.

The Supreme Court is set to receive $344.8 million from the state’s checkbook under the Senate’s amendment to House Bill 109, which will likely receive enough votes to reach Gov. Bruce Rauner’s desk.

That total is less than the $410.6 million Chief Justice Lloyd Karmeier petitioned the General Assembly for, which would have been nearly a 20 percent increase in resources he said are needed to continue probation reimbursements and the e-filing initiative.

A court spokesman could not be reached for comment this morning, but in remarks to a Senate Appropriations Committee in April, Karmeier said any cut to the court’s funding would be “catastrophic.”

In his budget proposal, Rauner wanted to decrease the amount of money given to the judicial branch by almost $60 million.

“If we had the cut, it would basically decimate the third branch of government,” Karmeier told reporters after the committee hearing in April. “The judicial branch could not operate.”

State law and a high court ruling mandated salaries and activities of the judiciary had to continue throughout the budget impasse, staying the Supreme Court’s budget at its fiscal year 2015 level. The law also dictates that unless lawmakers specifically allocate fewer funds for judicial salaries, those expenses are not to be reduced.

Karmeier acknowledged in April that the 1992 law making cost-of-living adjustments to judges’ salaries and the subsequent 2004 decision in Jorgensen v. Blagojevich “may be unfortunate.”

Sen. Thomas Chapin Rose, a Mahomet Republican who was one of the primary architects of the budget measure, said before the vote last night that while he appreciated Karmeier’s candor, judges are the only group in the state who receive consistent pay increases.

“I point it out because I think it’s an unfair, false narrative, a false choice, that is being presented to say this group is being underfunded,” Rose said. “No, the salary line has increased exponentially.”

“The judges control their own destiny,” he added.

Last night, he said all areas of government need to “tighten our belts for quite a number of years, and that includes the courts.”

The proposed budget plan spends about $38.5 billion, taking advantage of extra revenue generated by an income tax hike implemented last summer. It includes over $50 million for improvements at the Illinois Veterans Home in Quincy, where a water-borne bacteria killed 13 and caused others to get sick.

It also implements cuts to the Department of Corrections’ funding that were identified by Rauner’s office. The number of inmates has decreased and technological changes have enabled the department to lower the amount of money spent on personnel.

The Senate passed an amendment to House Bill 109 by 56 yes votes — only two Republicans voted no — and approved a measure by a veto-proof majority that ensures back-pay to state employees who have been owed money since 2011.

“Instead of being consumed by partisan bickering, I am glad that we were able to work together this year to pass a balanced budget that provides certainty for our state,” Democratic Senator Kwame Raoul said in a statement. “I hope that Governor Rauner lives up to his stated desire for criminal justice reform by signing this package that includes much-needed investment in disenfranchised communities.”

The Chicagoan is his party’s pick for attorney general.

The budget proposal heads to the House tonight. There might be a hold-up, though, because the framework includes funding for a controversial law approved last year that allows tax dollars to be spent on abortion procedures. On Tuesday, 11 state representatives told a group of reporters that their “moral convictions” could influence them to vote against the spending plan.