Published by Capitol News Illinois on May 27, 2019 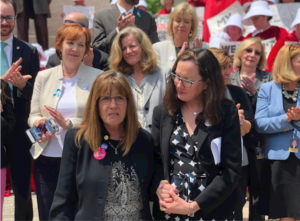 Sen. Melinda Bush, D-Grayslake, and Rep. Kelly Cassidy, D-Chicago, were emotional during a rally May 15 at the Capitol in Springfield calling for their bill, the Reproductive Health Act, to get a hearing. (Photo courtesy of Planned Parenthood of Illinois)

SPRINGFIELD — It is unclear whether Democrats have enough support in the Illinois House to pass an abortion repeal-and-replace measure. The bill was not called for an expected vote Monday in that chamber.

Opponents and proponents agree the Reproductive Health Act would be the most liberal reproductive health care statute in the country if enacted. It was trapped in legislative limbo until last week, when House Speaker Michael Madigan, a Democrat from Chicago, reportedly told members of his caucus the bill would get a second try.

Sponsor Kelly Cassidy, a Democratic representative from Chicago, injected the language of her original legislation, House Bill 2495, into a new measure, Senate Bill 25, on Sunday in a move referred to in the Statehouse as a “gut and replace.” It passed a committee hearing that night by a party-line vote after about two hours of contentious debate.

“I know we’re close on votes,” Sen. Melinda Bush, a Democrat from Grayslake, said Monday evening. She is the sponsor of the Reproductive Health Act in the Senate.

“Gov. (J.B.) Pritzker was clear when he ran for office that he wanted to see Illinois move forward. Obviously he’s going to sign the bill,” she added. “I believe we have the votes in the Senate — we’re just waiting for the House to send it over.”

The Democratic governor has vowed to “make Illinois the most progressive state in the nation for access to reproductive health care.”

In an emailed statement Sunday night, his spokesperson said, “the governor is a lifelong advocate for a woman’s right to choose,” particularly in light of the “recent attacks on access to reproductive health care across the country.”

The legislation Cassidy filed Sunday was amended to reflect concerns brought by lawmakers, insurance groups, health care groups and others.

“I do believe that we’ve responded and created that level of comfort for enough of my colleagues that we’re ready to move forward,” Cassidy said Sunday before the panel of legislators met to debate the act.

Demand for action on the bill came after states across the country, including Ohio, Alabama, Missouri and Georgia, passed laws restricting access to abortion. Some of those states did so in the hopes of challenging the 1973 case Roe v. Wade, which legalized abortion across the country.

Cassidy could call the Reproductive Health Act for a vote in the House when it reconvenes at 9 a.m. Tuesday.