Would be even more than Pritzker’s proposed 32-cent hike

Published by Capitol News Illinois on May 01, 2019 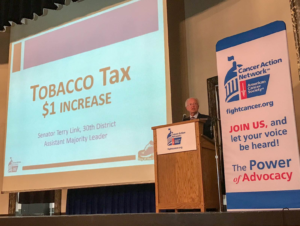 State Sen. Terry Link (D-Vernon Hills) tells a group of lobbying volunteers with the American Cancer Society on Wednesday in Springfield that he wants to be one of the tobacco industry’s most hated state lawmakers. Link had a hand in passage of Illinois’ public smoking ban and Tobacco 21 statutes. (Capitol News Illinois photo by Rebecca Anzel)

SPRINGFIELD — Anti-smoking advocates with the American Cancer Society want Illinois lawmakers to hike the tax on a pack of cigarettes by $1.

It is a proposal backed by Democratic senators who pushed to raise the age to purchase tobacco products to 21, and comes as legislators are seeking sources of revenue in the final weeks of the legislative session.

Gov. J.B. Pritzker initially introduced a 32-cent tax increase in his February budget proposal, which would change the current rate from $1.98 to $2.30 per pack.

The Governor’s Office of Management and Budget estimated that increase would generate an additional $55 million to be used toward Illinois’ Medicaid program and schools.

But Shana Crews, government relations director for the American Cancer Society’s Cancer Action Network, said bumping up the Democratic governor’s idea by 68 cents would be a “win-win solution” for the state.

“Not only would a $1 per pack cigarette tax increase prevent 28,700 Illinois youth from becoming adults who smoke and help 48,700 adults who smoke quit, but it’s also expected to generate more than $159 million in new annual revenue,” Crews said. “That’s money that could be put toward public health programs and help Illinois pay down its high deficit.”

Language for the tax bump has not yet been filed, but is expected to appear in the Senate next week.

Sen. Terry Link, a Democrat from Vernon Hills, sponsored legislation in 2007 to ban public smoking and was a proponent of the “Tobacco 21” initiative. He said Illinois is “a long way” from ending its campaign to end smoking.

“We know that we’re saving lives by stopping people from smoking and stopping e-cigarette [use] in the state of Illinois,” Link said. “If this $1 a pack doesn’t start sending [smokers] another message, I don’t know what’s going to, but we’ve got to make sure that people do not start smoking.”

Crews said lawmakers should consider implementing a tax on all other tobacco products to avoid pushing people toward those goods when the price of cigarettes increases. The Cancer Society recommended hiking the tax on cigars, snuff and chewing tobacco by 64 percent of the wholesale price.