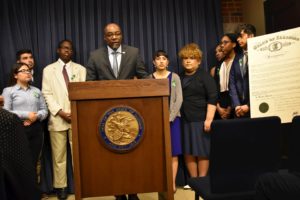 Attorney General Kwame Raoul speaks during a news conference May 15 at the Statehouse. Raoul has joined 42 other state attorneys general in requesting an “open dialogue” with video streaming services about avoiding the showing of tobacco products in shows and movies. (Capitol News Illinois file photo by Lindsey Salvatelli)

In a letter sent to companies including Netflix, Amazon, CBS Corporation and the Walt Disney Company, which owns Hulu, Attorney General Kwame Raoul and 42 other attorneys general wrote they wanted to “open a dialogue” about sheltering children from “tobacco imagery.”

That refers to all representations of nicotine products — cigarettes, e-cigarettes, cigars and others — as well as packaging, billboards, advertisements and cartoons.

“While we recognize the strides many streaming companies have taken to build a new media marketplace, the industry has, perhaps unwittingly, given countless children the key to a Pandora’s box of tobacco imagery, which the U.S. surgeon general has found causes young people to become smokers,” the state officials wrote in the letter.

Almost half of the top-performing movies in the U.S. from 2002 to 2018 were rated PG-13, according to the Centers for Disease Control and Prevention. Of those, 56 percent showed some kind of tobacco use.

Cigarettes are also prevalent in shows carried by streaming companies. A report by the Truth Initiative found more than half of the highest-rated shows carried by services such as Netflix, Hulu and Amazon Prime showed tobacco use, as compared to similarly-rated cable shows (22 percent) or broadcast shows (38 percent).

“I encourage the industry to do the responsible thing and limit tobacco use in their video content,” Raoul said in a statement. “I am committed to protecting young people from the harmful effects of tobacco use, and limiting their exposure to the glamorization of tobacco use in movies and television is one step we can take.”

The attorneys general recommended video streaming services take “reasonable steps to protect viewers from the ill effects of tobacco imagery,” according to the letter. Those include removing nicotine products from content for young viewers; specially designating certain content as “tobacco-free” for families and children; and refining their parental controls.

The National Association of Attorneys General’s interest in this matter, the group wrote, stems from a 1998 lawsuit commonly known as the master settlement agreement. Tobacco companies agreed to pay several states annual sums to compensate for medical costs related to smoking and were also prohibited from advertising directly to minors.

Tobacco-related businesses are not allowed to formally advertise on television or radio as part of the Federal Cigarette Labeling and Advertising Act.

“We remain vigilant in our commitment to reducing youth tobacco use,” according to the letter. “… We monitor tobacco advertising and promotions, including monitoring the entertainment industry’s influence over young people and portrayal of tobacco use. We welcome working with streaming companies to create policies and standards that reduce tobacco imagery in content watched by young viewers.”

Companies that were sent the letter, including Netflix, Amazon, CBS Corporation, Comcast Corporation and the Walt Disney Company, have not responded to requests for comment.

“As the attorneys general emphasize, the ongoing and even increasing appearance of smoking and tobacco use and related imagery in countless movies and shows that are streamed is a disaster for our youth,” said Cliff Douglas, vice president of tobacco control for the American Cancer Society. “One wonders what the industry is thinking, if anything, when they continue to put this damaging stuff out there; when they have complete discretion to be more thoughtful about protecting our children when pursuing their creativity.”

Douglas was involved in the master settlement agreement as an attorney working with the state of Mississippi. He added the Cancer Society is a member of a national coalition called Smoke Free Movies, and “will certainly work hand-in-hand” with the streaming companies to make the changes recommended by the attorneys general.

This is not Raoul’s first foray into a tobacco initiative since taking office in January. He signed on to a letter about three months ago asking the Food and Drug Administration to emphasize “enforcement actions against flavored e-cigarettes,” according to a news release.

“We hope this letter is the first communication in an ongoing discussion regarding the critical role streaming companies can play in the fight against the renormalization and glamorization of tobacco use,” the attorneys general wrote in conclusion.

Some of the states represented by the letter include those that produce tobacco, such as North Carolina and Kentucky, Douglas said.