Another Republican representative will file a near-identical lawsuit 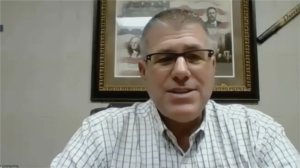 SPRINGFIELD — The Illinois Attorney General’s office filed a notice to appeal a downstate judge’s ruling releasing one Republican representative from the governor’s executive orders, according to court documents.

Xenia Republican Rep. Darren Bailey alleged in his lawsuit that by issuing successive 30-day COVID-19 disaster proclamations, Gov. J.B. Pritzker overstepped his authority. The governor characterized the suit as “a cheap political stunt” that will have dangerous ramifications if allowed to stand.

That appeal was made to Illinois’ fifth appellate district, which is based in Mt. Vernon and covers 37 counties in southern Illinois. The governor said Tuesday at his daily novel coronavirus update in Chicago that the Supreme Court was asked to get involved so the matter is more “swiftly” resolved.

“While the court’s order is limited, the risk it poses is significant,” Pritzker said Tuesday. “…We will not stop this virus if, because of this ruling, any resident can petition to be exempted from aspects of the orders that rely on collective action to keep us all safe.”

Republican Rep. John Cabello, from Machesney Park, said in an interview Tuesday he will soon file a near-identical lawsuit asking a judge to release all Illinoisans from Pritzker’s stay-at-home orders.

“I feel that this is so far of a government overreach that I want to find out if it’s constitutional,” he said. “Look, any more decisions that he wants to make, he really needs to start having the General Assembly’s input.”

The governor established a state of emergency on March 9. On April 1, he announced the novel coronavirus pandemic was a “continuing public health emergency” and signed a proclamation extending the disaster period. In addition to those actions, he issued 29-related executive orders in response to COVID-19.

At issue is whether the Illinois Emergency Management Act, approved by the General Assembly in the 1970s, allows a governor to declare subsequent 30-day emergencies.

It was passed to “insure that this state will be prepared to and will adequately deal with any disasters, preserve the lives and property of the people of this state and protect the public peace, health, and safety in the event of a disaster.”

According to the law, when a governor issues a disaster proclamation, he “shall have and may exercise for a period not to exceed 30 days” several emergency powers. It does not specify what happens after that period.

In its response to Bailey’s lawsuit, the attorney general’s office wrote in a court document the representative “celebrated” that last extension because flooding threatened his district.

“It is understandable why Bailey welcomed the governor’s actions to combat local flooding, but it is hard to understand why he is now changing his tune when the governor’s actions are geared to helping all Illinois residents,” according to the filing. “If Bailey were to prevail on his current theory of the Act — which limits the governor to just one proclamation per disaster — then the next time Illinois’s rivers overflow, all emergency efforts to respond to and remedy that flooding will have to cease once the first 30 days have passed.”

Bailey, in an interview Tuesday, said he does not see “absolutely any comparison” between the COVID-19 pandemic and river flooding.

“To the extent that Gov. Pritzker refuses to even understand the lawsuit says a lot about his character. He’s refusing the constitutionality of how the law should work,” he said. “There’s a whole bunch wrong with what the governor is doing and I truly believe that when people quit reading the headlines and dig into the meat of this, they’re going to be appalled with what the governor is trying to get away with here in Illinois.”

While the attorney general’s office did not yet file an official request to the appellate court outlining why Bailey’s lawsuit should not be successful, its circuit court filing in response to the representative sheds light on its major points.

Judge McHaney agreed with Bailey, ruling Monday that Pritzker’s emergency powers should have lapsed on April 8, or 30 days after the governor’s initial disaster proclamation.

But that interpretation “would lead to absurd, unjust, and profoundly harmful results to a degree rarely, if ever, contemplated by an Illinois court,” the state argued in that document.

And that decision “would sabotage” Illinois’ ability to quickly acquire personal protective gear — gowns, gloves and masks, for example — if affirmed by a higher court, the state argued.

“By upending the ability of the executive branch to respond to an unparalleled public health threat, Bailey’s requested relief would threaten lives throughout the entire state,” according to the state’s court filing. “…It is no exaggeration to say that billions of dollars and countless people’s lives hang in the balance.”

Residents of “sparsely populated counties,” such as those in Bailey’s district, are most at risk, the state argued.

Jasper County, for example, has one of the highest per capita COVID-19 infection rates in the state, and those cases are doubling about every 3 days. According to the state’s vulnerability index, there is one primary care doctor for every 9,536 people.

The infection rate in Cook County doubles every 14.5 days and there is one doctor for every 4,433 people

“Accepting Bailey’s argument means accepting the only possible result: COVID-19 would once again begin its exponential spread through the state,” the state argued in a court document. “In the process, many, many lives would be unnecessarily lost.”