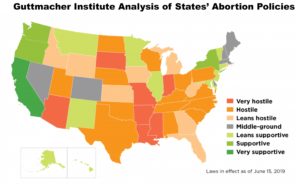 SPRINGFIELD — Illinois was designated a state that “leans supportive” — one step more protective than neutral — toward abortion access by a national research group that supports reproductive rights.

The Guttmacher Institute analyzed six types of restrictive abortion policies and six types of protective ones in each state, and classified them on a scale ranging from very hostile to very supportive.

Before this legislative session, Illinois was designated a “middle-ground” state. A bill from former Republican Gov. Bruce Rauner’s tenure allows taxpayer dollars to be used for abortions, and a series of attorney general opinions clarified advanced practice clinicians could prescribe abortion medications.

With the Reproductive Health Act, sponsored in the House by Chicago Democrat Kelly Cassidy and in the Senate by Grayslake Democrat Melinda Bush, Illinois has a state law enshrining access to the procedure and mandating private insurance companies that cover pregnancy-related benefits to cover abortion as well. That brought the Land of Lincoln’s categorization to “leans supportive.”

“In a devil’s advocate role, most of what we did with the RHA is remove bad things. In reality, 99 percent of what we did is take away potential pitfalls,” Cassidy said. “I guess it makes a little more sense through that lens, but I would’ve expected, between House Bill 40 and the RHA, that we would appear a little more favorable than just ‘leans supportive.’”

Bush added that by passing the act, the state became a “beacon” for women’s health care rights.

The states neighboring Illinois — including Wisconsin, Iowa, Missouri, Kentucky and Indiana — each received a varying designation of “hostile” abortion policies.

Elizabeth Nash, the Institute’s senior states issues manager, said there are a few actions the General Assembly could take to improve Illinois’ classification.

Democrats Elgie Sims, a senator from Chicago, and Emanuel “Chris” Welch, a representative from Hillside, are already working on one action — repealing the Parental Notification of Abortion Act.

The law, which mandates those under 18 consult their parents two days before getting an abortion procedure, is the only restriction the Guttmacher Institute tracks that Illinois has on the books.

Sims and Welch introduced legislation striking the act from law earlier this year. Efforts to advance Senate Bill 1594 and House Bill 2467 will resume either in late October when lawmakers are back in the Statehouse for veto session or in January for the next regular session of the General Assembly, Welch said.

Striking the Parental Notification of Abortion Act from statute is important, the sponsors added, because it is an obstacle to abortion access for minors.

“I think the repeal is, quite frankly, going to be a difficult discussion, and I’ve had many of them,” Sims said. “If we are going to make Illinois the strongest state in the union that it can be, then we have to have these legitimate policy-based discussions about what our laws look like, particularly as they are related to health care discussions.”

“This isn’t a slam on the law at all. It’s just that there remains more to do in Illinois,” Nash said.

Brigid Leahy, senior director for public policy for Planned Parenthood of Illinois, said the Institute’s criteria serve as motivation for advocates and legislators to “keep plugging away.”

“I’m glad they have high standards. We should hold ourselves to that and strive to meet them,” she said. “We know there is still more work to be done to improve the status of our state.”