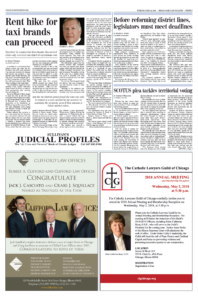 The Chicago Daily Law Bulletin published this piece in print on Tuesday, April 24, 2018. The jump is below.

Published by the Chicago Daily Law Bulletin on April 24, 2018

SPRINGFIELD — With the midterm elections just over six months away and the 2020 U.S. Census looming, a group of state lawmakers and activists are racing to present voters with a new way to draw Illinois’ political maps.

Both chambers of the General Assembly need to approve a proposed amendment by a three-fifths majority before it can go to voters, and at least six months must elapse before the amendment can appear on the ballot, according to the state constitution.

But because the House is not in session the first week of May, Peoria Republican Rep. Ryan Spain said effectively, the deadline is this Friday. 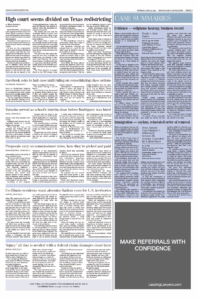 “There’s huge urgency,” he said. “There’s some advantages going down this path in terms of what would be upheld in the courts — what the scope of redistricting reform could tackle — but we have to get them called for a vote.”

Spain sponsors one of the proposals, House Joint Resolution Constitutional Amendment 43, written by members of the same group that tried to offer voters an option in the last two elections. This time, CHANGE Illinois — the Coalition for Honest and New Government Ethics — would remove politicians from deciding the boundaries of districts in favor of a “demographically, politically and geographically representative” commission tasked with creating similarly diverse districts.

The proposal stipulates “the Chief Justice and the most senior Supreme Court Judge who is not elected from the same political party as the Chief Justice” appoint a 16-member citizen panel to draw the map — seven democrats, seven republicans and two independents. At least two members need to be from each judicial district.

It has support from lawmakers of both parties in each chamber, but must first pass out of committee.

During a committee hearing last week, Sen. Sue Rezin, assistant Republican leader from Morris, said the hierarchy of criteria for drawing congressional, legislative and representative districts should be rearranged.

The proposal lists nine standards a new map must adhere to in “order of priority” — that it complies with federal law and ensures districts are equal in population, drawn with racial and language minority groups in mind, are continuous, compact, cognizant of local government boundaries and communities and are not drawn to favor a political party.

“We’ve just talked about political maps drawn for incumbent protection. That, if you look at the list, is number nine,” she said. “In our opinion, that should be a priority.”

Sen. Kimberly Lightford, a Democrat from Maywood and a member of the last redistricting committee, also pushed back against aspects of the proposal, such as language pulled from the California Constitution stipulating commissioners’ per diem pay.

According to the proposal, “Members of the [c]ommission shall be compensated at the rate of $300 for each day the member is engaged in [c]ommission business.”

Jeff Raines, communications and engagement director for CHANGE Illinois, said this protects the panel from being “underfunded or undercut,” but Lightford said the state could “easily” be stuck paying the 16-member panel $30,000 to work only one hour each day for 100 days.

Lombard Republican Rep. Peter C. Breen said there are merits to having a nonpartisan commission decide on district boundaries but is skeptical about their practicality for Illinois.

“It’s an overly optimistic fiction to think that you’re going to find a truly independent, nonpartisan person to serve on these commissions,” he said. “Lawyers know human nature, and knowing human nature, we know it’s better to have an evenly balanced group where we know exactly the partisan leaning of both halves.”

He proposed his own amendment that would involve a commission and the legislature working in tandem.

House Joint Resolution Constitutional Amendment 46 would allow constituent maps drawn by anyone in the state or country to be submitted to a commission, which would score them based on compactness and continuity. Members of each chamber would then vote to select the final three map options.

A spokesperson for House Speaker Michael J. Madigan said only those proposals that comply with the federal Voting Rights Act will be called for a vote on the floor of that chamber.