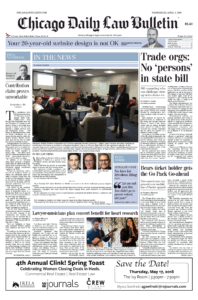 The Chicago Daily Law Bulletin published this piece in print on Wednesday, April 04, 2018. The jump is below.

Published by the Chicago Daily Law Bulletin on April 04, 2018

SPRINGFIELD — Trade groups are attacking legislation that would give people directly and aversely affected by administrative decisions standing to fight the state in court.

Bills proposed by Geneva Republican Steven A. Andersson in the House and Chicago Democrat Kwame Y. Raoul in the Senate would open up agency decisions about permits to criticism from “persons” in a lawsuit. Currently, the law allows for “parties” in a dispute to lodge a claim.

But the measures have drawn the ire of business groups, which claimed this week they go too far to expand standing. The courts have ruled that the current “parties” wording limits standing to the person or organization requesting the permit, and that members of the public have no role in the process. The change to “persons,” the business leaders argue, could be interpreted to give “anyone in the world” the right to weigh in on Illinois permit decisions. 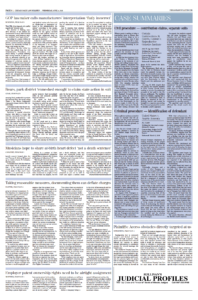 The jump is above the fold in the left column.

The Illinois Manufacturers’ Association, Farm Bureau, Chamber of Commerce and others said at a news conference Tuesday that the legislation, House Bill 5119 and Senate Bill 3005, would “clog our court system” with new lawsuits.

“Environmental activists are pushing legislation that would allow anyone in the world, not just in Illinois, to weigh in on permit decisions issued by Illinois agencies,” Mark Denzler, vice president of manufacturers association, said. “No longer would a person have to live in Illinois or be an impacted party.”

At issue is the phrase “adversely affected or aggrieved,” which the coalition said can be interpreted broadly to allow for challenges to Illinois policy to come from “a huge amount of people” who feel wronged.

“A person in California can claim that expanding Interstate 355 would add more cars to the road and increase emissions. A person in Indiana could claim that spraying for mosquitoes that control West Nile virus impacts air quality negatively,” Denzler said.

According to a memo written by two environmental lawyers, case law proves a person must be physically harmed, not abstractly harmed, to bring a suit under the bills.

The phrase Denzler called too broad was pulled from the U.S. Administrative Procedures Act, which states, “a person suffering legal wrong because of agency action, or adversely affected or aggrieved by agency action within the meaning of a relevant statute, is entitled to judicial review thereof.”

The U.S. Supreme Court found in Sierra Club v. Morton (1972) that the environmental activist group could not challenge a decision to permit commercial development because it did not adequately prove the project would affect its members personally.

“It is clear, then, that passage of SB3005 would not allow persons to seek judicial review who have only an intellectual or ideological interest in the administrative decision,” according to the memo. “People who were not so directly affected by the agency decision could not seek judicial review no matter how passionate their interest in the problem or how illegal the agency decision.”

Andersson said Denzler’s characterization of the potential effects of the measures is an “exaggeration” and “flatly incorrect.” Currently, he said, only the group seeking a permit can appeal a state agency’s decision. The bills would allow for others who might be affected to also make an appeal.

But Bill Bodine, associate director of State Legislation for the Farm Bureau, argued at the Statehouse media conference that there are “strong regulatory processes already in place” and adding new ones is unnecessary.

The House version of the bill stipulates someone has 60 days to lodge a challenge, though Andersson said he might change it back to the 35 days currently allowed under law. His bill additionally mandates that no new evidence “regarding the merits” of a decision can be submitted during judicial review.

And it explains that administrative decisions found to be “arbitrary, capricious, an abuse of discretion or otherwise not in accordance with law” can be struck down, among other criteria.

The Senate had an identical version, but it was amended at the end of February. It now stipulates that only a person who voiced his or her concern about a potential decision at a public hearing can seek a review.

Raoul said the changes are a result of working to resolve objections raised in committee and that the version currently under consideration in his chamber is not the final iteration.

“I appreciate that everyone is all up in arms about the bill, but this is an issue I’m committed to working to try to resolve,” he added. “The bill as it was passed out of committee is not how I intend on going forward on it. It’s what I clearly stated and that’s why there was bipartisan support coming out of committee.”

Raoul is the Democratic nominee for Illinois attorney general. His Republican opponent in the race criticized the measure.

“[The bill] creates a dissenter’s delay, allowing anyone who disagrees with the decision an opportunity to go to court to try to block the permit that the administrative agency already found should be issued,” Erika N.L. Harold, the Republican pick for the state’s top attorney, said in a statement.

“This unfettered expansion of standing will exacerbate Illinois’ already overly litigious environment and hurt job creation by further driving up the cost of doing business in Illinois,” she said.

The House version of the legislation is in committee. A hearing is scheduled for Tuesday. The Senate version is further along in the legislative process.