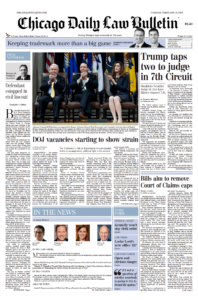 The Chicago Daily Law Bulletin published this piece in print on Tuesday, Feb. 13, 2018. The jump is below.

Published by the Chicago Daily Law Bulletin on Feb. 13, 2018

SPRINGFIELD — On the heels of a deadly bacterial outbreak at a state veterans’ home, a pair of bills introduced in the Illinois Senate would open up Court of Claims cases to larger awards.

Both proposals introduced earlier this year would remove the $100,000 cap that currently applies in tort cases against the state.

One would make an exception for suits specifically brought after the death of a veteran in a state-operated facility. The other would take a more general approach, eliminating the cap in all cases after July 1, 2015.

The measures are legislative responses to news reports last year that revealed an outbreak of Legionella bacteria, which can cause a severe form of pneumonia. The bacteria was found in the water at the state Veterans Home in Quincy. Thirteen veterans died. 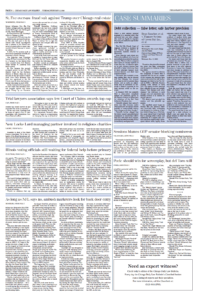 The jump is above the fold.

On Monday, two more cases of Legionnaires’ disease were confirmed at the Quincy home.

Currently, the Court of Claims Act mandates a limit of $100,000 be implemented in all cases brought against Illinois, unless the case is one involving a state-owned vehicle.

The Court of Claims has jurisdiction over cases against state officials that generally cannot proceed in the civil court system due to sovereign immunity. That affects any family of a veteran suing the state for damages.

But Sen. Andy Manar, a Bunker Hill Democrat, has proposed Senate Bill 2434, which would make an additional exception for any such cases filed or already in the system when it passed that regard “the death of a resident at an Illinois Veterans Home operated by the Illinois Department of Veterans’ Affairs.”

According to a spokesperson in his office, Manar was “not ready to talk about” the measure.

Another measure, Senate Bill 2481 would simply remove the cap and stipulate the change applies to all cases filed on or after July 1, 2015. Proposed by Sen. Michael E. Hastings, a Tinley Park Democrat, the measure is a broad response to the three cases of Legionnaires’ disease at the Quincy Veterans Home in the past three years and the 11 lawsuits resulting from deaths caused by the bacteria.

“I want to see this go through. These people, what happened to their families is unacceptable and $100,000 is not the value of one person’s life, that’s for sure,” Hastings said. “It’s upsetting for me. This isn’t a political thing — this is personal.”

As an Army veteran who served in Iraq, Hastings said he has the potential to be in a state-run home. If that was the case for his family, he said, and multiple people living there died of Legionnaires’ disease, his family would move him out. “The public can’t tolerate this, and they shouldn’t tolerate it.”

According to language in Hastings’ proposal, the current cap is “an arbitrary, inequitable and unjust limit.” It has been in place since 1972 and is one of the lowest in the country, the bill states.

“Even if the cap is removed, it’s really not going to come into play too much and it’s not like you’re going to see a surge in cases,” Scanlon said.

“We believe that certainly the people who are at the Quincy Veterans Home need relief,” he added. “Beyond that, everyone else in the state should also be protected and keeping this arbitrarily low cap is not fair, not when the rest of the country has clearly moved on and expanded the route to recovery.”

At the very least, Hastings said, he hopes to open a line of communication with Republican Gov. Bruce Rauner’s office.

“He’s going to have to have this conversation, and if he doesn’t, if he vetoes this bill, that just goes to show you he still really doesn’t care about these families,” he said.

In a statement, Rauner’s office said he is “open to a conversation on changing the cap on [C]ourt of [C]laims suits and will continue to monitor this legislation’s progress as it moves through the legislative process.”

On Feb. 8, Rauner told the editorial board of Crain’s Chicago Business that “we handled [the Legionnaires’ disease outbreak in Quincy] exceptionally well and we would not do anything different.” He has promised about $25 million for capital infrastructure improvements.

Attorney General Lisa M. Madigan’s office did not immediately comment on the ideas.