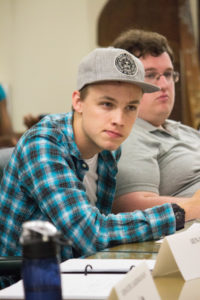 Blazon-Brown questioned why the Pre-Physical Therapy club’s first-aid and CPR event would cost more than a similar program offered by the university. (MANJU SHIVACHARAN / THE STATESMAN)

The Undergraduate Student Government senate tabled three decisions and sent one new legislative act back to the review committee at its meeting on Thursday, Sept. 25 due to time constraints. The meeting, which is mandated by the USG Code to end at 9:30 p.m., was extended several times to allow for additional deliberation.

The approval of sophomore Asher Marks as an Associate Supreme Court Justice was met with hesitation from the senate. They were confused why the committee so narrowly passed his nomination and wanted to wait for the senators who were not in favor of his nomination to be able to answer questions about their decision.

Marks, who was not in attendance at the meeting, was represented by senator Angelo Lambroschino, one of the senators who voted to present his nomination to the senate. Lambroschino said Marks was an Eagle Scout, did “a lot of work with the treasury” and answered the committee’s questions “very creatively.”

Senator Taylor Bouraad raised concerns about the errors present in the club’s application and senator Nathan Blazon-Brown was confused why a line in the budget outlining a first aid, CPR and AEP training event was more costly than a similar program offered by Stony Brook University.

Vice President of Clubs & Organizations Kimberly Pacia said her office would work with Davies to fix the club’s application to be voted upon again at next week’s meeting.

And after a lengthy debate over several aspects of a new Senate Bylaws Act presented by Vice President of Academic Affairs Steven Adelson, the senate voted to send the document back to the Rules and Legislative Review committee.

“I don’t want us to have to continue to come back to this document every week,” Adelson said. “I want us to focus on it in committee because some really good points were brought up here, so we might as well address them there and then bring it back when we don’t have to have too much discussion on the floor.”

One major point of dissent among the senators was Adelson’s proposal to not prepare printed documents, such as previous meeting’s minutes, the meeting’s agenda and legislation to be voted upon, and instead have the senators bring digital copies, which are also emailed to them in advance of meetings.

Adelson said he was motivated by the possible environmental impact of this proposal. The senate, however, was overwhelmingly not in favor.