Published by Capitol News Illinois on May 03, 2019 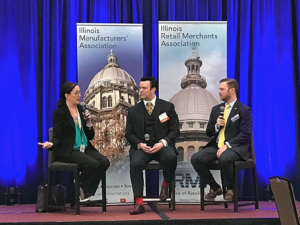 Rep. Kelly Cassidy, a Democrat from Chicago, tells Illinois business owners part of her plan for legalizing recreational marijuana for adults will be an increase in the number of retail licenses available. As part of the state’s medical program, there are currently only 55 dispensaries — there will need to be more if her bill successfully becomes law, she said this week. (Capitol News Illinois photo by Rebecca Anzel)

SPRINGFIELD — Details of a bill to legalize adult recreational marijuana were not released in the General Assembly this past week despite earlier assurances, but one of the initiative’s primary sponsors said they will be forthcoming “very soon.”

Chicago Democratic Rep. Kelly Cassidy said she hopes the bill would be approved by the General Assembly by the end of May. The “best case scenario” would be for the first legal sales to occur by Jan. 1, 2020.

Cassidy spent about two and a half years working with state Sen. Heather Steans, a Democrat from Chicago, negotiating the pieces of a potential legalization program and learning about the other nine states that have one.

In a  mid-April interview with Capitol News Illinois, Steans said details of the measure would be filed when lawmakers returned from Spring Break — either April 30 or the first week of May. The language is still not available.

The initiative is one being pushed by Gov. J.B. Pritzker — his proposed fiscal year 2020 budget includes $170 million in projected revenue from legalization dependent on licensing fees. Taxes collected on the sale of marijuana would not be available until sales commence in 2020 at the earliest.

“It’s critically important that we don’t look at this as a magic ATM machine because it isn’t,” Cassidy said. “The reality is other states started out with crazy high taxes — 30, 40, 50 percent — and people aren’t going to break up with their dealer over that.”

Instead, the forthcoming legislation will create additional licensing opportunities, she told a group of business owners at an event hosted by the Illinois Manufacturers’ Association and Illinois Retail Merchants Association this week.

“We want to add some layers of licensing to allow for a few more entry points into the marketplace,” Cassidy said.

Illinois has a medical marijuana program, launched in 2013 as a pilot program. There are two classes of licenses that operate for its patients — dispensaries, which are the retailers, and cultivation centers, which are the growers, processors, distributors and transporters.

Cassidy said there are 55 dispensaries in the state, so if recreational marijuana use becomes legal, Illinois will need to grant additional retail licenses.

“I don’t like thinking about what January 1, 2020 would look like with 55 retail outlets,” she said. “That will ramp up more quickly than some of the other categories.”

Cassidy said her “vision” would be for these smaller-grow operations to be housed in “some of these shuttered manufacturing districts that we see around the state.”

The bill will also create a processor license as well as a transport license, Cassidy said.

Legalizing recreational marijuana is important for Illinois, she added, because residents are already using the drug and law enforcement, legislators and other officials are not “equipping ourselves to deal with it well.”

“All of these things that we talk about, whether it’s a workplace issue, or a driving issue, or pick-one-and-go-with-it, it’s happening today,” Cassidy said. “This will actually allow us to take this product out of the shadows, ensure that the product that the people are buying is tested and regulated and packaged safely and securely and sold not by the dude on my corner.”

Advocates for the bill, including Pritzker, have also focused on coupling the legislation with criminal justice reforms for persons that were convicted of marijuana-related crimes.