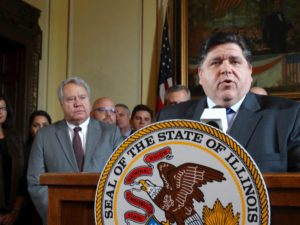 Gov. J.B. Pritzker speaks Thursday at the Capitol in Springfield during a news conference celebrating General Assembly passage of a pensions consolidation bill. Earlier this week, Pritzker vowed to veto legislation that also passed the General Assembly that would reinstate a tax break on the purchase of airplane parts. (Capitol News Illinois photo by Peter Hancock)

SPRINGFIELD — Legislation reinstating and retroactively applying tax break for aircraft parts cleared the Senate on Thursday overwhelmingly and without controversy despite the governor’s promise to veto the measure.

Supporters from both parties said the bill would protect Illinois’ competitiveness and maintain jobs. But Democratic Gov. J.B. Pritzker, in public comments Monday, promised a veto if it reached his desk because it “would forgive $50 million of taxes that are owed by people who are in this private jet industry.”

During Senate debate Thursday, Rachelle Crowe, a Democrat from Glen Carbon, said the sales tax exemption was on the books for years before expiring and lapsed without any regulatory or official bodies noticing. Repair companies, therefore, neglected to collect the tax from jet owners who had work done on their aircrafts during that period.

The bill is retroactive because it would be “absurd,” Crowe said, to think companies would go back to their customers to collect that sales tax years later.

Several senators, including Cahokia Democrat Christopher Belt, spoke of the “devastating” effects of not reinstating the tax break, including loss of jobs.

Republican Sen. Chapin Rose, from Mahomet, said it is “ludicrous” for Pritzker to consider vetoing a piece of legislation that, for his district, is about “jobs and the future economic vitality of the region.”

House Bill 3902 was approved by the Senate on a 48-1 vote, with the only no vote coming from newly appointed Sen. Patrick Joyce, D-Essex. Two members voted present. The House passed the measure Oct. 30.

Though the Senate on Thursday approved additional reform measures to a coal ash removal law signed by Gov. J.B. Pritzker earlier this year, the House did not take any action on the legislation before adjourning until next year.

Coal ash is the byproduct created when coal is burned to generate power, and it contains heavy metals, such as mercury and arsenic, that are toxic and can seep into groundwater. The legislation mandates that those who build, change or close such a pit first participate in two training programs — one for hazardous waste workers, the other for operating heavy equipment.

It also creates an option for the owners of pits — often unlined — to purchase insurance. According to the bill, the policy premiums must be paid at least two years in advance.

Democratic Sen. Scott Bennett, from Champaign, said that provision is a product of negotiations and ensures a company does not purchase an insurance policy as a means of “financial assurance” only to cancel it.

Sen. Paul Schimpf, a Republican from Waterloo, said that is an issue he would rather see addressed through regulatory means, such as permitting and administrative sanctions, instead of legislation.

“I think it’s more punitive than solving the problem,” he said.

Senate Bill 671 passed by a vote of 39-12, with one senator voting present. It can be reconsidered when the General Assembly reconvenes Jan. 28, 2020, for it next regular session.