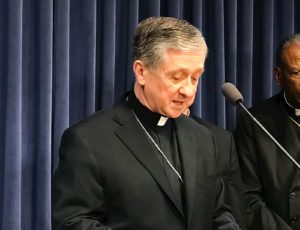 Cardinal Blase Cupich, of the Archdiocese of Chicago, says lawmakers need to oppose two reproductive health care measures proposed by Democrats because they need to “defend the inherent and inalienable value of every human life.” He was joined at a news event Thursday in Springfield by each of the five other Illinois bishops. (Capitol News Illinois photo by Rebecca Anzel)

One measure would repeal a law mandating a minor notify her parent or guardian before getting an abortion. The other would repeal the state’s abortion law and replace it with language creating reproductive health care as a fundamental right.

The Bishops of Belleville, Joliet, Peoria, Rockford and Springfield joined Cardinal Blase Cupich of the Archdiocese of Chicago at a news event Thursday. Cupich said it is “critically important” lawmakers oppose the legislation.

“This is a radical departure from what we have. This is not about the issue of a right to an abortion, although we would question that, but it is about vacating any rights or dignity that … were not decided by Roe v. Wade,” he said. “This is coming at it from a different direction.”

Cupich argued the Reproductive Health Act, which backers and detractors agree would be the most liberal reproductive health care statute in the country, would remove protections in current law for health care workers who refuse to participate in abortion procedures due to moral, ethical or religious objections.

This point is also raised by attorneys with a pro-life, Chicago-based law firm, the Thomas More Society, which released a legal analysis of the measure.

“The Illinois Health Care Right of Conscience Act — which is unaffected by this legislation — continues to protect health care providers from participating in any care that is inconsistent with their religious and moral beliefs. Period. Full stop. Suggesting otherwise is simply not true,” Colleen Connell, executive director of the American Civil Liberties Union of Illinois, said in an emailed statement.

“What, then, is the problem this legislation solves?” he asked.

The legislation exists in both chambers of the General Assembly. Both House bills are seemingly stuck in a subcommittee, as is the Senate version of the Reproductive Health Act.

Only the Senate version of the effort to repeal the Parental Notification of Abortion Act has moved to the chamber floor for a possible vote.

Robert Gilligan, executive director of Catholic Conference of Illinois, said Thursday that could change “at any point in time, so we’re here to just express our opposition to [them], and we hope they stay where they are.”

“Rhetoric and misinformation do not protect women or health care providers. Those who oppose reproductive health care and rights have made one thing clear: Their real agenda is to ban safe, legal abortion entirely,” Jennifer Welch, president and CEO of Planned Parenthood of Illinois, said in an emailed statement. “Opponents of safe, legal abortion continue to hide their motives behind lies and misinformation about abortion.”

The church leaders were asked three times by reporters about the handling of alleged child sex abuse cases. Cupich and Gilligan did not answer directly.

“Those are all very important questions that all of us can address to you individually given our own circumstances, but this issue, no matter who speaks for it, is so compelling that it needs to be heard, and the focus needs to stay on this today,” Cupich said in response to one question. “Those other questions, and others that you may have about other topics, are important and they surely should be responded to in their own venue.”

On March 20, a Minnesota-based law firm released a 185-page report accusing nearly 400 clergy members and church staffers of sexual misconduct. The document lists the names, pictures, assignment histories and background information for individuals associated with churches throughout the state, in each of the six dioceses. Each diocese strongly disputed the report.