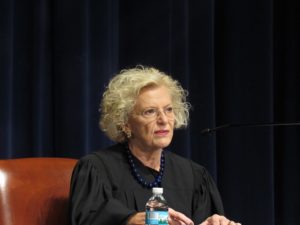 SPRINGFIELD — A statute dating back to the early 1800s cannot be applied to daily fantasy sports betting, Illinois’ highest court ruled Thursday. Fantasy sports, the court ruled, are games dominated by skill, not by chance.

In April 2016, Colin Dew-Becker and Andrew Wu competed in a fantasy NBA contest through the website FanDuel. They each paid $109 — a $100 wager and $9 fee to the company. Wu’s team scored almost double the points Dew-Becker’s team did, making him the winner.

Dew-Becker filed a lawsuit three days later to recover his bet. Under a centuries-old Illinois law called the Loss Recovery Act — passed in 1819, one year after Illinois became a state and 40 years before the Civil War — those on the losing end of an illegal wager have a legal avenue to get their money back.

In order for that to be a possibility, however, that money had to be lost while gambling. The state Supreme Court, after consulting recently-published peer-reviewed studies, ruled that while nothing in the act’s language omits internet contests from its purview, daily fantasy sports bets do not fit the definition of gambling as dictated by law.

“Because the outcomes of head-to-head DFS contests are predominately skill based, we conclude that (Dew-Becker) was not engaged in ‘gambling’ with (Wu) as required” under statute, Chief Justice Anne Burke wrote in the opinion. “… We determine here only that the DFS contest at issue in this case does not fall under the current legal definition of gambling.”

Justice Lloyd Karmeier, whose retirement takes effect in December, was the lone justice among six to dissent. Justice Michael Burke, who is not related to the chief justice, did not participate in this case. He was appointed to replace retired Justice Robert Thomas on March 1, after arguments in the case were heard.

“Throughout the history of antigambling laws, courts have recognized the effort and ingenuity man has exerted to circumvent the law by disguising activities as legal or contests of skill although the intended appeal is to chance,” Karmeier wrote in his dissent. “…The ingenuity exerted in head-to-head DFS contests duped the majority into believing it is a game of skill when truly it is a game of chance.”

He took issue with the majority justices using outside research to base their decision instead of materials submitted by attorneys for Dew-Becker and Wu. This, he said, can set a dangerous precedent.

He cites poker as an example. There is “statistical evidence” the game is won by the most skillful player — one with the best strategy and knowledge of the card game. That interpretation would legally define poker not as gambling, as Illinois courts have long held, but as a contest of talent.

If the majority justices used what Karmeier wrote was the “proper standard,” they would have determined daily fantasy sports are games of chance.

“Once a lineup is set and the athletic games commence, the DFS participant cannot influence the athlete’s performance or how points are accumulated,” he wrote. “At this point in the game, the outcome of the contest relies entirely on a contingent event that the participant lacks all control over, and there is no subsequent opportunity for the participant to overcome the chance involved.”

The six justices who participated in deciding the case agreed in other matters.

The Loss Recovery Act requires bettors have a “direct” connection to each other — simply, one person must lose to another. That enables its purpose of “not simply to undo illegal gambling transactions but ‘to deter illegal gambling by using its recovery provision as a powerful enforcement mechanism” is met, according to court documents.

That contradicts the argument Wu’s legal representative, William Gantz, made in a court filing. Gantz said this interpretation “seeks a green light for a cottage industry in Illinois — lodging hundreds of thousands of claims against unsuspecting citizens who have been engaged in online DFS contests in Illinois for at least over a decade.”

Burke wrote the filing of lawsuits would be in keeping with the act’s “explicit” goal. The five majority justices added that state lawmakers are able to alter current regulations to manage daily fantasy sports contests.