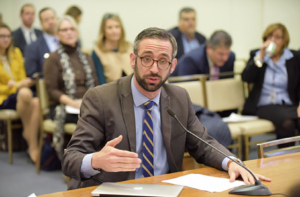 During a committee hearing Wednesday in Springfield, state Rep. Will Guzzardi said his bill is “simply” about lifting a ban on local governments from enacting rent control measures. The Chicago Democrat fielded questions from his colleagues about specifics, instead reinforcing his point that all details should be crafted by the individual communities. (Photo by John Berry, Illinois House of Representatives)

SPRINGFIELD — A Chicago Democrat is calling for local governments to again have the authority to implement rent control measures.

Families in neighborhoods in the Windy City, including Logan Square in Guzzardi’s district as well as Bronzeville and others, are being displaced, the representative said. Developers and “unscrupulous” landlords purchase buildings with existing tenants, raise the rent dramatically and price out residents.

This is happening in other areas, too, Guzzardi said — Peoria, Rockford and Urbana-Champaign, among others.

“This is a bill about turning powers back to municipalities, allowing them to step in and do what they believe is right, to weigh all the evidence — the pros and cons, the studies for and the studies against — and try to craft policy that allows landlords to continue to raise rents to keep up with market prices while also trying to curtail some of the egregious behavior that we’ve seen that has hurt so many families in my community and many others,” Guzzardi said.

But during an informal hearing on the proposal Wednesday, several members on the House Civil Judiciary Committee saw the issue as more complicated.

“By putting a little Band-Aid on the festering wound of the problems driving high costs, we’re just making the patient sicker,” she said. “I really think that if we’re serious about affordable housing that there are a lot better directions to go in.”

McDermed said some of those include addressing the state’s high property taxes and the “outrageous segregation” in Chicago.

Guzzardi said his legislation was not a “silver bullet” to solve the entire housing cost issue, but addressing rent control was a good place to start.

Jawanza Malone, executive director of the Kenwood Oakland Community Organization, said Guzzardi was “300 percent accurate.” The group is one of the founding members of the movement to lift the ban implemented by the Rent Control Preemption Act when it was signed into law by Gov. Jim Edgar in 1997.

Of the households in Illinois that rent, about 30 percent have an income level at or below the poverty line, according to the National Low Income Housing Coalition. Many of those households spend half of their income just on rent.

Malone said rent control is as much a part of the housing affordability problem as an engine is part of a car.

“Rent control is not a panacea — it’s not going to solve all our problems, but it is a critical part of the solution, and leaving that out would be equivalent to a car without an engine,” he said. “The idea that Springfield has all the answers when Springfield isn’t doing anything to address the problem is a fallacy.”

Rep. André Thapedi, the committee chair, also asked Guzzardi about what his proposal would mean for the health of the real estate market and property assessment values. The Chicago Democrat is an attorney and has a background as a real estate broker.

The long-term effects of repealing the Preemption Act, Guzzardi said, would depend on what the local governments chose to do. He pointed out there were no rent control measures in places before the Act became law, so it is not a “foregone conclusion” municipalities will enact one if it is repealed.

He also said opponents of his legislation refer to rent control as a “boogeyman” and “anti-free market force,” but the studies conducted in other cities that have such measures, including New York and San Francisco, are not conclusive.

Guzzardi — who began his answer to every question seeking specific plans with the preface that he wanted individual municipalities to make the decisions — said he hated to “be beating a dead horse.”

The point Mazzochi raised was a valid concern, he said, and one that a community and school board should discuss. If residents were not in favor of a rent control measure and the school district was “hostile” to it, the community would not approve the measure.

Malone said because rent control is an economic justice issue in many ways, and a racial and gender justice issue in others, that local governments should be given the chance to debate whether the tactic to combat housing affordability would work well in their community.