Burke: Among other issues, ‘We don’t know today how many people are in the jails’ 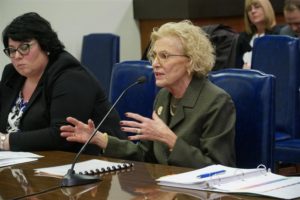 Illinois Supreme Court Chief Justice Anne Burke tells lawmakers Wednesday at the Capitol in Springfield that the judicial branch needs money for a new system to track the state’s justice system. “We don’t know today how many people are in the jails,” she said. Seated with Burke is Kara McCaffrey, assistant director of the Administrative Office of the Illinois Courts. (Photo by Lee Milner of Illinois Times)

SPRINGFIELD — Illinois’ justice system has a problem, the top court’s chief justice told lawmakers this week. There is no statewide system to track how many people are in jail and for how long, for example, or how quickly judges clear their docket.

The Illinois Supreme Court, which has authority over all courts in the state, asked members of the General Assembly for the financial resources in part to acquire technology “capable of accurately capturing and compiling data from each county,” Chief Justice Anne Burke said in separate appearances before House and Senate budget panels.

“The state has 102 counties, 102 elected county boards, 102 county clerks, 102 sheriffs — all independent contractors,” she said, adding that a uniform electronic filing system would enable courts and other stakeholders to develop best practices and provide transparency with state agencies.

It would cost about $1.6 million to purchase the technology for such a system, according to the judicial branch’s budget request. Marcia Meis, director of the Administrative Office of the Illinois Courts, estimated it could be in place in six to eight months.

In 2016, the high court began an e-filing initiative to simplify the process of submitting documents, save time and resources, and help those representing themselves in court cases. Currently, all filings for civil cases must be electronically submitted — about 600,000 documents per month, Burke estimated — and circuit courts have the option of allowing the system to be used in criminal cases as well.

“However, the current system for collecting data has become obsolete, resulting in data that is often unreliable,” Burke said. “As we move forward, the data collected by the Judicial Branch — and the speed and accuracy with which it can be accessed — will only continue to grow in importance.”

Hoffman Estates Democratic Rep. Fred Crespo suggested counties’ participation in e-filing could be set as a “precondition” to receive funds from the court.

For the next fiscal year, the high court is asking for $483.3 million, not only for electronic filing, but to continue reimbursing costs paid by local governments. That is just more than $29 million more than what the judicial branch received this fiscal year.

It used its first budget increase in six years last year to fully reimburse counties for salaries and probation services — the first time it was able to do so in 30 years. Statute requires the Supreme Court to refund local governments for those expenses, but after years of not being able to do so, services in some counties were diminished, depending on taxpayers’ ability or local leaders’ willingness to bear the financial burden.

Those included pretrial services and decreased supervision of adult and juvenile offenders on probation. Instead of being locked in a jail cell, a person on probation is able to live and work in their community. It is a period of supervision different from parole, which is overseen and paid for by the Department of Corrections.

Counties were able to fill 86 vacant positions and create 148 new ones to service those that interact with the courts.

“The majority of these new positions, 119, are dedicated to enhancing pretrial services … [which] have, historically, been woefully underfunded but are essential to the criminal justice system,” Burke said.

Probation “is a far more effective use” of Illinois taxpayers’ money, she added. It costs about $38,000 to keep an offender in jail, but approximately $3,000 to $5,000 to have that offender supervised by a probation officer.

Rep. Dan Caulkins, a Republican from Decatur, said fully funding that aspect of the courts last year “was a priority.”

“I hope that we continue to put emphasis on the probation as opposed to incarceration,” he said. “It’s not just cost savings, but I think it also gives people a better opportunity to get their lives back together.”

In his budget proposal, Democratic Gov. J.B. Pritzker allocated the Supreme Court an additional $500,000 beyond what it asked for. That money is earmarked for the circuit courts to help clear cannabis expungement cases.

On Tuesday, Sen. Heather Steans, a Democrat from Chicago and one of the Cannabis Regulation and Taxation Act’s main framers, asked why the high court did not ask for that money.

“I understand this year we just passed the bill,” she said. “But now it’s already in place. The money has been there, we had a process that we thought was set up, so I was just surprised that you’re not continuing to ask for that knowing we are going to have more expungements coming down the road.”

Kara McCaffrey, assistant director of the Administrative Office, said those are funds the General Assembly needs to appropriate from the revenue in sales tax on cannabis products.

Burke said the Supreme Court is sending a message of “sustainability” in its budget request for fiscal year 2021.

“Full funding of the judicial branch budget is critical to maintaining probation positions and improving a system that is critical to making any criminal justice reform meaningful and successful,” she said. “Anything less risks a return to higher incarceration rates and higher recidivism, but … more burdens on the state treasury and a system that does not serve the people of Illinois.”

Burke’s term as chief justice began on Oct. 26. She is the third female to serve in the position, and the first chief justice in almost a decade from Cook County.