Karmeier: Every Illinois resident affected by what we do 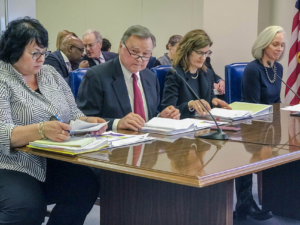 SPRINGFIELD — The chief justice of Illinois’ top court asked lawmakers this week for what would be the judicial branch’s first budget increase in six years.

The Supreme Court, which has authority over all courts in the state, needs “sufficient funding” to meet its constitutional obligations — “to guarantee every court user a justice process that is efficient, effective and fair.”

In separate appearances before a House and Senate budget panel, Chief Justice Lloyd Karmeier told lawmakers he was asking for a 23 percent increase in funds not as the representative of a state agency, but as the leader of a co-equal branch of government.

“The judicial branch serves tens of thousands of users every single day, whether as litigants, as victims, as witnesses, jurors, law enforcement or just other justice stakeholders — every resident of the State of Illinois is affected by what we do,” he said. “And given that, you might be surprised to know that our budget, and the budget of the third branch of government, is less than 1 percent of the overall state budget.”

The judiciary is requesting just more than $423 million from the state’s main checking account for the next fiscal year after receiving a flat budget of almost $345 million each of the five previous years.

Karmeier made a big push for additional funding for probation, a period of supervision a person receives from a judge instead of serving time in prison. It is different from parole, which is overseen and paid for by the Department of Corrections.

The chief justice said probation is a “much more efficient way to handle” many of the people who go through Illinois’ criminal justice system, especially those who are nonviolent offenders. Instead being in a jail cell, a person can keep a job and maintain contact with family, for example.

Karmeier said probation also saves the state fiscal resources. The cost of assigning an adult to a probation officer is about $2,500 per year. Placing that same person in jail costs about $38,000 annually.

Assigning a juvenile to a probation officer costs about $3,700, he added. Housing that person in a Juvenile Department of Corrections facility is $70,000 per year.

The Supreme Court is mandated by law to fully cover the cost of the state’s probation system. But because other aspects of its budget — such as judicial salaries, which are at levels that are constitutionally protected — cannot be altered, Karmeier said the system is “one of the few places where we can cut.”

The result has been that the judiciary funds probation at 66 percent, leaving counties across the state to pick up the rest of the cost.

Republican Sen. John Curran, of Downers Grove, said Thursday at a committee hearing that it is “incredibly difficult” for the 102 counties in Illinois to find the extra money to contribute to those court operations.

“When counties sit down and try to make these budget decisions on a year-in-and-year-out basis, probation is always going to be an option on the chopping block,” he said. “As we talk about really trying to move forward on reducing recidivism in this state, which is a really noble and important purpose, I really thank you for your emphasis on probation services because that is incredibly important.”

The reception was not as positive last year when Karmeier made the same ask of the House and Senate budget committees for probation services funding. Lawmakers, who had not passed a budget in almost three years at that point, were more focused on why the chief justice was asking for more money.

“It seems to me that with the questions that we received this year, there seems to be more of an awareness of the need to fund probation fully, and that in fact, probation is a valuable tool available to the court system to help people,” Karmeier said, “which means helping the everyday citizen who doesn’t get in trouble because we keep more people productive and working and not recidivating.”

Governor J.B. Pritzker’s budget proposal for Fiscal Year 2020 would leave the judicial branch at its current funding level. The chief justice said he took it as a “positive sign” the administration did not cut the court’s budget, but said he “[wished] he knew” why the funding increase he requested was not reflected in the governor’s proposal.

Rep. Robert Rita, a Democrat from Blue Island, asked Karmeier what impact the legalization of recreational marijuana would have on the courts system.

“Obviously the low-level offenders would no longer be coming through the court system, so that should result in fewer people coming into court,” he said. “I think it’s safe to say that prosecution of low-level offenders, those who have cannabis for personal use, can vary very much from county to county because of the need or the lack of resources, so it may not have a substantial impact, but I think it has to have an impact on our system.”

He added it was a policy decision the Legislature needed to decide.

This is the last year of Karmeier’s term as chief justice. He told lawmakers it has been a “tremendous honor” to serve in that capacity.

“I’ve always wondered why we’re called the ‘third branch,’” Karmeier joked after Wednesday’s House appropriations panel. “I think we should be called the ‘first branch’ of government.”

He added he was “encouraged” by the direction this year’s budget request conversation with lawmakers took as compared to previous years, and that he is “hopeful” funding the courts is a priority for the General Assembly.

“The wisdom of the Founding Fathers was such that they wanted the judicial branch to be completely independent so that there wouldn’t be the problems or temptations of having constituents or having to bend or sway to popular sentiment at a time,” Karmeier said. “We attempt to work together with the legislators, but they have to understand we have a sphere that we operate in and it’s their obligation under the Constitution to fund us.”