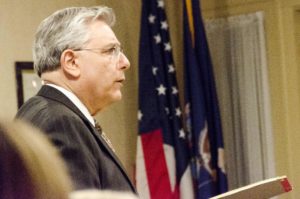 Attorney Paul Bloom speaks at the Village of Great Neck Estates Board of Trustees meeting on Monday, May 8, 2017. (Photo by Rebecca Anzel)

Developers of a proposed 11-home Clover Drive development presented the plans to the Great Neck Estates Board of Trustees Monday, three years after winning over Village of Great Neck officials.

The project would build 11 single-family homes — 10 in Great Neck and one in Great Neck Estates — which would be “consistent with the character of the neighborhood” and accessed by a proposed private road built off of Clover Road, Bloom said.

There is a home currently on the Great Neck Estates property, which the company would demolish and rebuild.

Trustees asked Bloom and an engineer for the project questions about how the project would affect the village. The road was also a point of contention in 2014, when the project went before Village of Great Neck officials. The developer said then that it would be 26 feet wide.

Aside from that one home in the village, the board was most interested with the access road. Trustees heard information from a 500-page report conducted about potential traffic.

Trustees also asked questions about landscaping, sanitation and the rest of the site plan in addition to a proposed homeowners association for the 10 homes proposed to be built in Great Neck.

The Village of Great Neck would provide these services for the other 10 homes, aside from police. Nassau County Police Department’s 3rd Precinct would respond to any emergencies.

Trustees also asked about the three homes that would be constructed on property abutting the backyards of three Great Neck Estates homes at a distance of anywhere between 84 and 95 feet.

Bloom, a former Village of Great Neck Planning Board chairman, said the homes in the village are elevated two to six feet higher than the proposed new homes and retaining walls would need to be built.

The Village of Great Neck Board of Zoning Appeals approved the project as did the Great Neck Planning Board in May 2014, on the condition that Great Neck Estates trustees approved it and that state officials approved plans for the access road.

The Great Neck Estates board made no decision Monday. 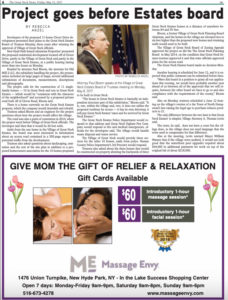 The Great Neck News published this piece in print on Friday, May 12, 2017.

Another hearing is scheduled for June 12, and it is expected that public comment can be submitted before then.

“Were this board in a position to grant all our applications this evening, we would have probably another year ahead of us between all of the approvals that we will require, between the other board we have to go to and also compliance with the requirements of the county,” Bloom said.

Also on Monday, trustees scheduled a June 12 hearing on the village’s version of a the Town of North Hempstead’s law raising the legal age to purchase tobacco products to 21.

The only difference between the two laws is that Great Neck Estates’ is simpler, Village Attorney A. Thomas Levin said. The town, he said,  does not have a court but the village does, so the village does not need language that the town used to compensate for that difference.

Also at the meeting, Levin warned Mayor William Warner that if the village were audited, it would not look good that the waterfront pool upgrades required about $44,000 in additional payments for work on top of the original bid of about $218,000.