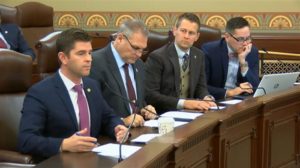 One string of code among 8.5 million others controlling the “hundreds of functions” of the secretary of state’s office resulted in 574 people who identified themselves as non-U.S. citizens being registered to vote, the agency’s senior legal advisor, Nathan Maddox, said.

Of those people, 15 cast ballots. Only one was not a citizen, Maddox said.

“I think that if there’s a silver lining to this, it’s going to cause us to make sure that our systems are as good as they can possibly be,” Steve Sandvoss, director of the Illinois State Board of Elections, said.

Four Republican representatives spent more than an hour Wednesday, on the eve of early voting opening for the state’s March 17 primary election, questioning secretary of state and elections board officials. Springfield Rep. Tim Butler said several instances caused “fears that our elections system is compromised,” and asked what can be done to alleviate further issues.

“What has come to light in the past few weeks — from self-identified non-citizens registering, to 16-year-olds being forwarded through the system, to people who opted out of registering actually being forwarded, to this week’s revelation … that almost 800 previously incarcerated Illinois citizens had their voting rights cancelled — has certainly wounded the integrity of voter registration here in Illinois,” Butler said.

Secretary of state officials, who took responsibility for the errors, said legislative solutions are not necessary to address lawmaker concerns. Ultimately, Maddox said, “there is no part of this that is not going to be reviewed.”

Jeff Clines, director of Information Technology for the agency, added that his staff is “testing and reviewing” the programs in place to ensure there are no other problems and are “looking for opportunities” to better the system.

Maddox said the office plans to add an “exit button” to the signature pad, as recommended by the elections board. It will enable those applying for a driver’s license to not be added to the state’s voter rolls. The office also plans to make that opt-out language more clear.

Officials did not clearly indicate whether more training for the roughly 2,300 Department of Motor Services employees — who are on the “front-lines” of automatic voter registration, Butler said — is needed. Currently, regional managers receive memos detailing policies, procedures and best practices. Managers then work with attendants on how to execute those.

Brenda Glahn, senior legal advisor for the secretary of state’s office, said the office is “always looking for ways, if we see that a particular error [has been made], we certainly will send out another memo.”

“I do want to point out that this was an error, and there was no effort put forth to hide anything or to cook the books, so to speak,” Secretary of State Jesse White said. “We want to make sure that not only do we take on the job, but we take on the responsibility that goes along with it; and we want to make sure that the individuals who have registered to vote get an opportunity to do so.”

Rep. Joe Sosnowski, of Rockford, asked both agencies to update the General Assembly on the progress of any steps that will be taken in May before it adjourns.

Secretary of state and Board of Elections representatives emphasized Illinois’ voter registration and election processes are of the utmost importance.