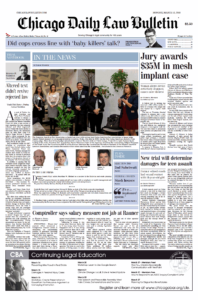 The Chicago Daily Law Bulletin published this piece in print on Monday, March 12, 2018. The jump is below.

Published by the Chicago Daily Law Bulletin on March 12, 2018

While Comptroller Susana Mendoza, a Democrat, maintained the bill is not targeted at or meant to embarrass Republican Gov. Bruce Rauner — a point she made at least eight times during a Thursday news conference — it is one of several recent efforts to shape the debate on budget issues.

Coined the Truth in Hiring Act, House Bill 5121 and Senate Bill 3233 would ban “offshoring” the salaries of employees working for the office of the governor to other agencies. The term is a nod to the practice of hiding assets in other countries to avoid paying taxes.

The jump is below the fold in the left column.

Her office’s payment system codes employees in a way that shows which agency a state employee is paid by and for which agency that employee works.

Using this information, Mendoza said the governor has 102 staffers, not the 44 his office budgeted for this fiscal year. Those additional 58 staffers, whose salaries total $5.5 million, are paid out of other agencies’ budgets.

“Let’s be clear: all state agencies that operate under Governor Rauner are part of the administration and carry out the necessary functions of state government. Unlike previous administrations, we have been transparent and publicly reported employees that work in our office — reflecting that number in our headcount,” Rauner spokeswoman Rachel Bold said in a statement.

The bill, which has bipartisan support, would take effect immediately if successful. That would force the governor to amend his budget proposal.

Many times, when Mendoza pushes for a bill or new practice, she uses the same argument — her support of efforts she saw as a furtherance of transparency were not to needle Rauner, but to clean up the way Illinois does business.

The comptroller’s new initiative follows her legislative win in November when the General Assembly voted to pass Mendoza’s Debt Transparency Act despite Rauner’s opposition. The law mandates state agencies under the governor’s control to send reports of outstanding bills to her office more frequently.

“For too long, governors of both parties have been able to hide unpaid bills at their agencies,” Mendoza said when the debt transparency bill passed. “This legislation opens up government to citizens, taxpayers and my office, which is charged with paying the state’s bills.”

Before that, she urged legislators to approve a bill that would require independent oversight on any efforts by a governor to negotiate healthcare contracts.

At the time, Mendoza said “The Governor’s Democratic predecessor, Governor Pat Quinn [sic] made the same mistake and rather than learning from it, Governor Rauner is repeating it on a larger scale. It was wrong when the Democratic governor did it and it’s wrong today.”

And in July when the General Assembly passed a budget, after about 2½ years the state went without one, Mendoza said. “There is plenty of blame to go around with both parties, for the decades of fiscal mismanagement.”

Mendoza said she champions certain issues because she sees herself as a “fiscal watchdog.”

“I’m not going to not do my job because someone else finds it offensive for me to be looking out for the best type of financial oversight that we can have as a government,” she said. “That’s my job. I take it seriously.”