Comptroller to lawmakers: No more pay for time not worked 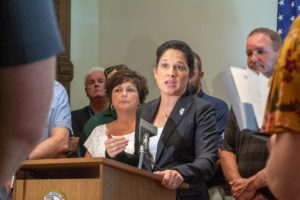 Comptroller Susana Mendoza stands among labor leaders in her office Aug. 13 in Springfield as she signs an executive order regarding enforcement of prevailing wage laws in light of a $45 billion capital infrastructure plan which became law earlier this year. Mendoza on Tuesday called “ridiculous” a law that allows legislators to be paid for days they did not hold office. She proposed prorating legislators’ pay, ensuring they are only paid for only the days they hold office. (Capitol News Illinois photo by Jerry Nowicki)

SPRINGFIELD — Illinois’ chief fiscal officer announced a plan this week to remedy the “ridiculous” law that allows legislators to be paid for days they did not hold office.

Representatives and senators are paid in 12 equal disbursements on the last working day of each month. Current law allows lawmakers to receive a full salary as long as they hold office at least one day in each pay period.

Comptroller Susana Mendoza proposed prorating legislators’ pay, ensuring they are only paid for the days they hold office. She also wants to shift their salary schedule to be the same as it is for other state officials and employees — twice monthly.

Her legislative partner on the initiative, Elgin Democratic Sen. Cristina Castro, said the change would bring the legislative branch in line with the private sector.

“This is a glaring loophole that has been exploited far too many times at the taxpayers’ expense, and I’m sick of it. It needs to be closed,” Castro said in a news release.

The bill appears to have bipartisan support. Republican Rep. Mike Murphy, of Springfield, proposed a near-identical measure 12 months ago. The initiatives differ in one respect — when they take effect. Murphy’s bill would become enforceable immediately; the Democrats’ plan would begin at the start of the 102nd General Assembly in January 2021.

Altering lawmakers’ pay during terms for which they are elected is unconstitutional, a spokesperson for Mendoza said, which is why the measure’s effective date is later.

Murphy said he sent a letter to Mendoza and Castro asking for their support on his bill and offering to help ensure the initiative, in whatever form, is successful this legislative session.

The “bottom line,” Murphy said, “is let’s just get this done,” no matter whose name is on the final version.

“We have got to do whatever we can to get the trust back of the people, and we have to earn it,” he added. “Bills like this show that we’re serious about doing the right thing.”

A spokesperson for Mendoza said the resignations of former Chicago Democrats Sen. Martin Sandoval and Rep. Luis Arroyo, both “egregious examples,” indicate the need for a statutory change.

Sandoval, whose Capitol office and home were raided by federal agents, announced on Nov. 27 he would resign his position to avoid “distraction to the important work that needs to be accomplished.” His last day as a state lawmaker was Jan. 1.

Arroyo was arrested on federal bribery charges in late October but waited until Nov. 1 — the same day a special investigative panel was to consider whether to expel him from the chamber — to officially resign.

Because both former legislators held office for one day, they were paid the full month’s salary in accordance with state law, according to the comptroller’s office.

In some instances, a legislator’s replacement would get paid for the same full month’s work as the retired or resigned official.

“That’s ridiculous. I can think of no other enterprise that pays for an ex-employee for work they never performed,” Mendoza said in a news release. “Each of these lawmakers left under a cloud but stayed just long enough — the first of the month — to collect an ‘exit bonus’ from state taxpayers for a month’s pay for no work.”

The initiative is one Castro said the newly-formed ethics reform commission will consider as part of its recommended ethics overhaul legislative package.

In an interview in November, Murphy said his bill was one of about 30 proposed by Republicans and not addressed by the General Assembly during the fall veto session.

His measure is House Bill 818 — it has eight co-sponsors, all Republicans. Castro’s measure will be Senate Bill 2456 when it is formally read into the record.