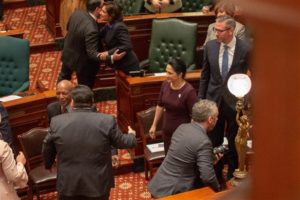 SPRINGFIELD — Illinois’ top fiscal and investment officers touted some of the economic policy initiatives laid out by Gov. J.B. Pritzker in his State of the State speech Wednesday and stressed the importance of continuing to balance the budget.

The credit ratings agencies’ view that Illinois has better financial stability than it did a year ago means “more dollars are going into our roads and bridges and our schools than into Wall Street bankers’ pockets,” Treasurer Michael Frerichs said.

Ethics reforms will ensure state officials are “always looking for the opportunity to stand up for taxpayers and to be an advocate for them,” Comptroller Susana Mendoza said. Her office is backing measures to address the current “corrupt” red light camera system and eliminate the “exit bonus” some lawmakers get when they leave office.

And while it is “good to see a governor talking about positive aspects of our state,” Frerichs said, “it’s clear we have financial issues that will need to be addressed.”

He said his office is “doing what we can to help out.” It increased the amount of interest money Illinois’ investment accounts generated from $49 million when he took office to $340 million last year. It also instituted programs designed to help residents save for college and retirement.

Mendoza said the implementation of the Debt Transparency Act, which the General Assembly approved in 2017 on a bipartisan basis, “helped open up the books” and “tackle the financial crisis” caused when Illinois ran more than two years without a budget. With the information state agencies were mandated to send her office, it was able to address outstanding bills.

“The more we know about our condition, good news and bad news, the easier it is going to be for us to actually collectively work together to move the ball forward for Illinoisans,” she said.

Frerichs said the next step is hearing whether Pritzker has “a plan to make sure we continue to have a balanced budget and we’re able to pay down our backlog of bills.”

Mahomet Republican Sen. Chapin Rose, who is one of the Senate GOP’s top budgeteers, agreed with that sentiment. Still, Rose said despite the “rosy view” of Illinois’ financial footing described by the governor, he thinks “we’re in a pause in the crisis, if you will, a sort of calm before the storm.”

Based on Pritzker’s five-year projected financial plan, Rose said he expects the upcoming budget to have a $1.8 billion gap.

“I think that the first stop in fiscal restraint is stop digging the hole. Any new spending should be paused for the next fiscal year,” he said. “We won’t know what, if anything, the governor is proposing to do until (his budget address), although he’s hinted and he certainly made promises on some of those.”