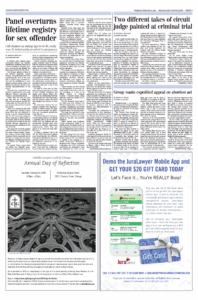 The Chicago Daily Law Bulletin published this piece in print on Thursday, Feb. 06, 2018. The jump is below.

Published by the Chicago Daily Law Bulletin on Feb. 06, 2018

SPRINGFIELD — A conservative legal group is bringing its fight against a law allowing tax dollars to be used on abortions to the state appellate court.

The Thomas More Society appealed its Sangamon County lawsuit to the 4th District Appellate Court in Springfield, claiming state taxpayers “will suffer irreparable harm” if money is allowed to be spent on abortions as allowed by House Bill 40, which became Public Act 100-583 in September.

The group has filed motions to expedite its appeal in the case, Springfield Right to Life v. Felicia Norwood, No. 4-18-0005, asking for a timetable that includes reply briefs from the state by Feb. 20.

Attorney General Lisa M. Madigan’s office, meanwhile, has countered the appellate court should not grant the society’s motion in the case because her office is busy prepping for another major case — the national fight over union fees in Janus v. AFSCME, to be argued at the U.S. Supreme Court later this month.

The office filed briefs last week saying Deputy Solicitor General Brett E. Legner, the lawyer on the HB40 case, is also “a principal author” of the state’s brief in Janus and will be present before the nation’s highest court in Washington, D.C., when it’s argued. 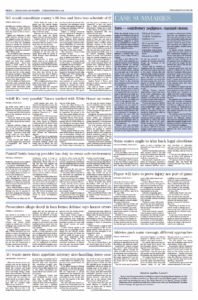 The jump is below the fold.

“Because of his responsibilities related to the preparation for the Janus argument, the undersigned counsel will not be able to complete defendants’ brief by the proposed February 20 due date,” the office wrote.

The Thomas More Society, however, argued that’s not a good enough excuse. Legner is just one of many lawyers the attorney general has at her disposal, the group argued, and the need to spend most of the month prepping for arguments “that he acknowledges he is not even presenting” is questionable.

On the merits, the group’s case against the law is twofold. First, they argued the General Assembly did not estimate HB40’s cost to taxpayers or appropriated funds to cover that cost. According to the brief filed Jan. 29, the law will cost Illinois between $22.5 million and $30 million annually, none of which qualifies for Medicaid reimbursements.

They claim that’s a violation of Article 8, Section 2(b) of the state constitution, which says appropriations for a fiscal year “shall not exceed funds estimated” by lawmakers to be available that year.

“What the framers of our constitution said was the General Assembly has to do two things: Estimate the revenues and spend within that estimate, and that’s it,” Breen said today during a Statehouse news conference. “And so the argument I made in the HB40 case is you’ve got this spending on HB40, there’s no revenue estimated to support the many new services that are required under HB40, so you can’t do it.”

He also claims the law should not have taken effect on Jan. 1. Although both chambers approved it by early May, a procedural hold in the Senate kept it from Gov. Bruce Rauner’s desk until September. The constitution requires measures approved after May 31 to receive a three-fifths majority vote to take effect immediately, but House Bill 40 only received a simple majority.

The Sangamon County trial court dismissed the case in January, with 7th Judicial Circuit Court Judge Jennifer M. Ascher ruling the issue of how lawmakers estimate funds was a “political question,” and wading into it would be a separation-of-powers violation.

Ascher also ruled that regardless of when HB40 was handed to the governor, it was passed before the May 31 deadline.

In her office’s response to Breen’s request for an expedited proceeding, Madigan wrote that the plaintiffs are “right-to-life or pro-life organizations and legislators who voted against House Bill 40” who waited just over two months after the law was enacted to file their initial complaint.

She also addressed Breen’s argument that “irreparable harm” to taxpayers will occur if a court does not hear the case quickly.

“Indeed, the circuit court already has found no basis for plaintiffs’ claims and, even if state money is spent by virtue of Public Act 100-538, plaintiffs do not establish that expenditure will occur during the briefing phase of the appeal,” according to the response. “At most, they simply state that defendants anticipated spending money for services performed under the law between January 1 and June 30, 2018, but do not indicate when those services will be paid for.”

It is unclear when the court will decide whether to expedite the case, but Breen said he does not expect it to take long.