Published by the Times of Middle Country, Times of Smithtown and Village Beacon Record on Sept. 05, 2016 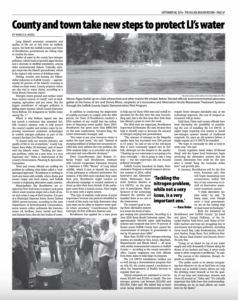 The Village Beacon Record, pictured, Times of Middle Country and Times of Smithtown published this piece in print on Sept. 08, 2016.

Long Island’s economic prosperity and quality of life are at risk from an unlikely source, but both the Suffolk County and Town of Brookhaven governments are taking steps to combat the issue.

Bodies of water in the county face nitrogen pollution, which leads to harmful algae blooms and a decrease in shellfish population, among other environmental defects. Critically, nitrogen seeps into the Island’s groundwater, which is the region’s only source of drinking water.

Fishing, tourism and boating are billion-dollar industries in Suffolk County — approximately 60 percent of the Island’s economy is reliant on clean water. County property values are also tied to water clarity, according to a Stony Brook University report.

Nitrogen enters ground and surface water from various sources of runoff, such as landscaping, agriculture and pet waste. But the largest contributor of nitrogen pollution is failing septic systems, which County Executive Steve Bellone (D) designated as “public water enemy No. 1.”

Which is why Bellone signed into law last month a resolution that amended Suffolk County’s sanitary code to help protect the county’s aquifer and surface water by improving wastewater treatment technologies to combat nitrogen pollution as part of the county’s Reclaim Our Water initiative.

“It doesn’t help our tourism industry, our quality of life or our ecosystems,” county Legislator Kara Hahn (D-Setauket) said of issues with the Island’s water. “Tackling the nitrogen problem, while not a sexy issue, is a very important one.” Hahn is chairwoman of the county’s Environment, Planning & Agriculture Committee.

Town and county officials are tackling the problem by utilizing what Hahn called a “multipronged approach.” Brookhaven is working to track any issues with outfalls, where drains and sewers empty into local waters, and Suffolk County is employing alternative septic systems.

Municipalities like Brookhaven are required by New York State to inspect each point where waste systems empty into a body of water and create a map of their location. It is part of a Municipal Separate Storm Sewer System (MS4) permit because, according to the state Department of Environmental Conservation, storm sewers collect pollutants like bacteria, motor oil, fertilizer, heavy metals and litter, and deposit them directly into bodies of water.

In addition to conducting the inspections of outfalls necessary to comply with the MS4 permit, the Town of Brookhaven conducts a DNA analysis of any outfall that has indications of impacting water quality. Since 2007, Brookhaven has spent more than $880,000 on this state requirement, Veronica King, the town’s stormwater manager, said.

“You want to put your resources where it makes the most sense,” she said. “Instead of dumping millions of dollars into structural retrofits that don’t address the true problem, the DNA analysis helps us to prioritize and make educated and cost-effective decisions.”

Town Councilwoman Jane Bonner (C-Rocky Point) said Brookhaven contracts with Cornell Cooperative Extension because it maintains a DNA “library” of Long Island wildlife, which it uses to identify the source of any pathogens in collected stormwater. For instance, if the DNA tests conclude they came from pets, Brookhaven might conduct an educational campaign to remind residents to clean up after their furry friends. If the pathogens come from a human source, there might be an issue with a septic system.

“This type of analysis could prove of great importance because any patterns identified as a result of this study can help determine what next steps can be taken to improve water quality where necessary,” Councilwoman Valerie Cartright (D-Port Jefferson Station) said.

Brookhaven has applied for a state grant to help pay for these DNA tests and outfall inspections for the first time this year, because, King said, this is the first time New York State has offered a grant to cover the work.

The DNA tests are important, Brookhaven Supervisor Ed Romaine (R) said, because they help to identify ways to decrease the amount of nitrogen seeping into groundwater.

“The amount of nitrogen in the Magothy aquifer layer has increased over 200 percent in 13 years,” he said of one of the sub-layers that is most commonly tapped into in Suffolk, although not the deepest in the aquifer. “Cleaning up our waterways is not going to be done overnight — this is going to take a long time — but the waterways did not become polluted overnight.”

Suffolk County launched its Septic Demonstration Program to install cesspool alternative systems in 2014, called Innovative and Alternative Onsite Wastewater Treatment Systems (known as I/A OWTS), on the property of participants. Manufacturers of the technology donated the systems and installed them at no cost to the homeowner.

The county’s goal in testing these alternative systems is to lower the levels of nitrogen seeping into groundwater. According to a June 2016 Stony Brook University report, “the approximately 360,000 septic tank/leaching systems and cesspools that serve 74 percent of homes across Suffolk County have caused the concentrations of nitrogen in groundwater to rise by 50 percent since 1985.”

More than 10,000 of the nitrogen-reducing systems are installed in New Jersey, Maryland, Massachusetts and Rhode Island — all areas with similar environmental concerns to Suffolk County — according to the county executive’s office. County employees met with officials from these states to help shape its program.

The I/A OWTS installations worked out so well during a demonstration program that on July 26, the county passed a resolution to allow the Department of Health Services to regulate their use.

Typical cesspools are estimated to cost between $5,000 and $7,000 to install. The low nitrogen systems cost between $12,000 and $20,000, Hahn said. She added that as more areas facing similar environmental concerns require lower nitrogen standards and, as the technology improves, the cost of cesspool alternatives will go down.

Until then, Hahn said county officials have been discussing the possibility of subsidizing the cost of installing the I/A OWTS. It might begin requiring new homes to install low-nitrogen systems instead of traditional cesspools. Or, upon an old system’s failure, it might require an I/A OWTS be installed.

“We hope to eventually be able to help in some way,” she said.

County Legislator Sarah Anker (D-Mount Sinai) said she hopes local businesses begin producing the alternative systems that the county determines best work for the area since it would “keep the economic dollar here” and provide jobs.

In January, Brookhaven will be the first town, Romaine said, that will begin mandating new constructions within 500 feet of any waterway to install an alternative wastewater treatment system.

“I think alternative systems work,” he said. “In many ways, even though we’re a local government, we are on the cutting edge of clean water technologies.”

“Living on an island on top of our water supply and with thousands of homes along the shores of our harbors and bays, it never made sense to allow cesspools to proliferate,” he said.

The success of the initiatives, though, depends on residents.

“The public needs to be always recognizing that whatever we do on land here on Long Island and in Suffolk County affects not only the drinking water beneath us but the quality of our bays and waterways, streams and rivers all around us,” Hahn said. “It’s critically important that folks have that understanding. Everything we do on land affects our water here on the Island.”

Algae built up on a lake where birds and other marina life inhabit. Times Beacon Record News Media file photo.