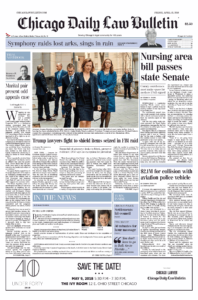 The Chicago Daily Law Bulletin published this piece in print on Friday, April 13, 2018. The jump is below.

Published by the Chicago Daily Law Bulletin on April 13, 2018

SPRINGFIELD — Legislation requiring Illinois county courthouses to have a private room for nursing mothers is one step closer to becoming law.

The unanimously passed measure would mandate each building with a circuit courtroom include at least one lactation space by this January.

Sen. Elgie R. Sims Jr., a Democrat from Chicago and Senate Bill 3503’s sponsor, said it was an “historic day” for the state to further a bill that enables women to more fully participate in the court system.

“I agree with one of my Republican colleagues who said this is a bill whose time has come,” he said at a news event after the vote. “It’s time for us to make sure we provide everyone with equal access to justice, and that’s what this bill does.” 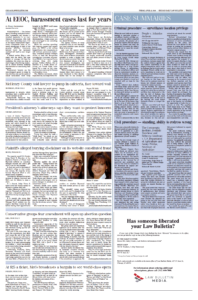 Sims was joined by civil liberties attorney Gail Schnitzer Eisenberg, as associate with Stowell & Friedman, Ltd., who said the obstacles she experienced as a lawyer and new mom informed her of the need for this legislation.

In one instance in 2016, she went to the McHenry County Courthouse in Woodstock to argue a dispositive motion. The bathroom did not have an outlet for her to use a pump, so Eisenberg asked personnel for an alternative accommodation. She was told to use the cafeteria, an “open room” and face the wall.

“This is not the kind of dignity that I went into the legal profession in order to obtain,” she said. “Having accommodations for pumping mothers — attorneys, jurors, witnesses and anyone who finds themselves exercising the fundamental right to access our courts — well, we’re going to have more dignity for all those who walk in.”

The bill stipulates each lactation room include a chair, table and electrical outlet and “a sink with running water where possible.” It must also be located apart from a restroom.

“None of us are going home tonight to make dinner for ourselves or our families in our bathroom — certainly not in a bathroom stall,” Chicago Democratic Rep. Kelly Cassidy, the House sponsor, said. “That’s the equivalent of what we’re asking parents to do when they express breast milk, which is food for their children, in a public restroom stall.”

She pointed out that the requirements are already being implemented in airports, which sometimes have a mobile pod device for mothers to use.

Edwardsville Democrat Rep. Katie Stuart has a similar measure in the House that would instruct the secretary of state’s office to install a lactation room in the Capitol, Howlett Building and Stratton Building — none of which have one currently. It is awaiting a vote that could send it to the Senate.

Stuart said she met with the Capitol architect recently about House Bill 1042 and he identified several places where such a room could be constructed with the same stipulations as those outlined in Senate Bill 3503.

Sims’ measure moved to the House and was assigned to a preliminary committee today. If it passes the chamber, it continues to Gov. Bruce Rauner’s desk.