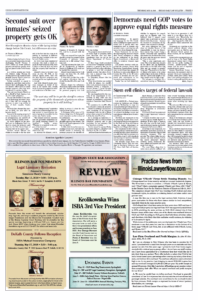 The Chicago Daily Law Bulletin published this piece in print on Thursday, May 10, 2018. The jump is below.

Published by the Chicago Daily Law Bulletin on May 10, 2018

SPRINGFIELD — To approve new language for the U.S. Constitution codifying that rights cannot be denied due to gender, state representatives need to wrangle conservative votes — and they are calling on Gov. Bruce Rauner for help.

House Democrats do not have the supermajority needed to follow their Senate colleagues in calling for the ratification of the Equal Rights Amendment, a 46-year-old effort to reinforce women’s legal footing.

Last month, senators easily approved the measure, Senate Joint Resolution Constitutional Amendment 4, with bipartisan support. If the House is successful, Illinois will become the 37th of the 38 states needed to formally add the proposed 28th amendment to the country’s governing document.

Rauner has not said definitively whether he supports the amendment but on Monday said, “I’ve indicated that I support equal rights.” And as governor, he has no formal role in the process — because the measure is a resolution, his signature is not required for passage. 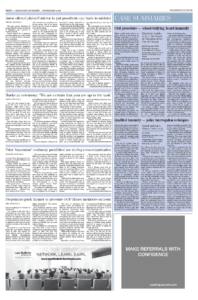 But some legislators say that does not absolve Rauner of his responsibility to lead the Republican caucus. Rep. Louis I. Lang, a Skokie Democrat who sponsored this measure in the House for about 25 years, said the governor should be “true to his word.”

“This is your opportunity, governor. This is the time that you pick up the phone and call legislators, particularly on the GOP side of the aisle, and say enough is enough,” Lang said. “The governor of the state of Illinois is its leader, is the primo political figure in the state of Illinois, and has a great bully pulpit to convince people to do the right thing.”

The measure is scheduled for a committee hearing on Wednesday, but there is no guarantee it will make it to the House floor for a successful vote. Historically, the amendment has died in the chamber — that happened in 1982 when the initiative failed nationwide and in 2014.

Proponents are counting on the current political climate, where movements such as #MeToo and the Women’s March gained national traction, for the initiative’s success.

Conservative opponents have argued as long as the Equal Rights Amendment existed that it would allow for the public funding for abortion, gender-neutral bathrooms and the end of separate-gendered sports teams.

Geneva Republican Steven A. Andersson, the measure’s chief co-sponsor who is not running for re-election, called those claims “head fakes” and said his colleagues’ hesitation in voting affirmatively stems from not wanting to be “labeled” or “primaried.”

“I’ve looked at the case law. I understand the issue from a legal perspective,” he said. “There is no basis for the argument that this is somehow going to cause abortion to suddenly be legal in all 50 states. It’s simply not true and I’d be happy to debate anybody on that topic any time.”

He pointed to a case that came before the New Mexico Supreme Court in 1998 that argued the state’s Human Services Department illegally discriminated against women by not allowing for publicly funded abortions under the protections of the state’s Equal Rights Amendment. The justices ultimately agreed.

But Andersson said the court’s framing of the issue is important. Instead of questioning whether it is legally permissible to deny women the right to an abortion, which men cannot have or need, the justices focused on whether denying a medically necessary procedure for women specifically was an equal rights violation.

“They defined it so broadly that they were able to say it was a violation of the equal rights amendment,” he said. “But had they framed it more appropriately — is it a violation to say we don’t have to provide publicly funded abortions when men can’t have them — there wouldn’t be a violation there.”

“You have to remember that supreme courts are political entities too, and that this case is not an indicator whatsoever about what the rest of the states would do,” Andersson added.

If state representatives pass the amendment next week, there is no guarantee that it will be successful nationally. It still needs one more state’s approval and those that have not done so yet are predominantly conservative states in the South, including Alabama, Florida, Mississippi, Oklahoma and Utah.

Additionally, Congress may need to extend the deadline for ratification beyond the 10 years it already allotted, which expired in 1982.

Regardless, activists say not only is it important for Illinois to stand up for women’s rights, it is equally important for lawmakers to do so with a bipartisan vote.

“No one party can, nor should, support the Equal Rights Amendment,” Sally Pancrazio, Illinois State University’s former dean of college education, said.

Democratic gubernatorial candidate J.B. Pritzker, whose mother marched in support of the initiative, said Rauner is taking the wrong approach.

“He can influence the outcome of this vote if he will ask his Republican colleagues in the House to vote for it,” he said. “He hasn’t done that, and as a result, it’s clear he doesn’t seem to support the ERA.”