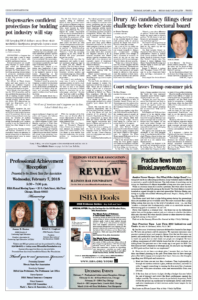 The Chicago Daily Law Bulletin published this piece in print on Thursday, Jan. 11, 2018.

Published by the Chicago Daily Law Bulletin on Jan. 11, 2018

SPRINGFIELD — Congress has little more than a week to renew legal protection for states with medical marijuana programs.

Federal lawmakers are considering whether to renew legislation, called the Rohrabacher- Blumenauer Amendment, that prevents the Department of Justice from spending federal dollars to prosecute marijuana-related charges in states where cannabis is legal. The provision is set to expire Jan. 19.

But officials at Illinois dispensaries and legal experts in the industry are confident Congress will act and that the state’s marijuana business will continue to grow.

Scott Abbott, chief operating officer for HCI Alternatives, said he does not think the amendment is at risk of expiring because medical marijuana programs have received “enough traction” with the American public. HCI Alternatives operates two dispensaries, one in Collinsville and the other in Springfield.

“I suspect whenever the next budget is passed, the amendment will still be in there simply because, even if it’s anecdotal, there is more evidence being produced every day about the benefits of medical cannabis,” he said. “And there’s enough information that Congress is going to say the Department of Justice has other things to worry about.”

Sessions has a history of criticizing state legalization of marijuana. Last May, he wrote a letter to the legislative leaders in both houses disapproving of the Rohrabacher-Blumenauer Amendment and asking that Congress not renew the legislation.

“I believe it would be unwise for Congress to restrict the discretion of the [d]epartment to fund particular prosecutions, particularly in the midst of an historic drug epidemic and potentially long-term uptick in violent crime,” he wrote in the letter.

In both his memo issued Jan. 4 and his letter to Congress, Sessions argues marijuana is dangerous and points out Congress also believes marijuana to be dangerous.

“I think Congress’ next moves will be a direct response to that,” Peter Murphy, a partner in Eckert Seamans’ regulated substances practice group in Wilmington, Del., said. “We’ll see if Sessions and Congress are in line. I don’t think they are, and I think it’s more than likely Congress will extend those protections contained in the Rohrabacher-Blumenauer Amendment.”

The 9th U.S. Circuit Court of Appeals, sitting in California, looked at what protections states with medical marijuana programs are afforded under the amendment twice, most recently in United States v. Steve McIntosh. The court argued the Justice Department could not use its allocated funds to prosecute individuals who operated within the parameters of California’s medical marijuana laws.

“It remains to be seen whether other courts will follow the [9th] Circuit’s interpretation of the statutory language,” Michael S. McGrory, partner at SmithAmundsen LLC, said in an written statement. “However, I think the reasoning employed by the [9th] Circuit in McIntosh will prove persuasive around the country.”

The court made clear that the amendment only applies to medical marijuana programs, legal in 29 states and the District of Columbia. The Cole Memo, issued in 2013 by former deputy attorney general James Cole, did not differentiate between medical and recreational programs. States with the latter risk potential federal prosecution.

“It makes it very confusing because now, if you’re a medical-marijuana patient or you’re a business in a state where it’s legal, you will need to look to the federal prosecutor in that state or federal district to determine his or her enforcement priorities,” Murphy said. “And that could be problematic because it could play out differently in different jurisdictions.”

While the rescission of the Cole Memo may not directly affect licensed dispensaries in Illinois, it could indirectly perpetuate an existing industry issue.

In February 2014, the Department of Treasury’s Financial Crimes Enforcement Network issued guidance to banking institutions that relied heavily on the Cole Memo to help explain “how financial institutions can provide services to marijuana-related businesses.”

The federal government considers handling money associated with a marijuana transaction to be money laundering, and the memo issued “benchmarks” that clarified which suspicious activity reports banks should file each time money in a marijuana business’ account is manipulated, William Silas Hackney III, a partner in SmithAmundsen’s financial services group, said.

“The removal of those benchmarks most likely places Illinois financial institutions in the unenviable position of having to report any and all marijuana-related activity with their customers (even that activity which after extensive due diligence indicates is in all respects compliant with Illinois’ already rigorous compliance standards) with a time consumer and expensive degree of heightened care and disclosure,” he said in an written statement.

Hackney added these economic barriers are likely keeping Illinois banks from working with the cannabis industry.

Illinois’ medical marijuana program, which became effective about four years ago, is set to expire in July 2020.

The law, Public Act 98-0122, included language to explain why legislators defend the program as legal: “States are not required to enforce federal law or prosecute people for engaging in activities prohibited by federal law. Therefore, compliance with this [a]ct does not put the [s]tate of Illinois in violation of federal law.”

Abbott, who runs the HCI Alternatives dispensaries, said he does not think Sessions’ rescission of the Cole Memo will halt the progress of the proposed state Cannabis Regulation and Taxation Act, encompassed in House Bill 2353 and Senate Bill 316, which would legalize recreational marijuana in Illinois and regulate it in the same way as alcohol.

“Recreational use is coming, and it’s wise to start crafting some language before it’s changed federally,” he said. “Those conversations are taking place now, which I think is wise.”