Provision is part of bill that includes gambling expansion measures 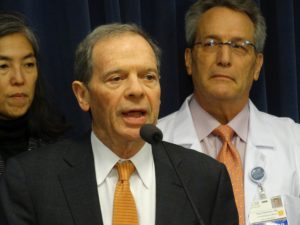 Senate President John Cullerton speaks during a news conference May 7 at the Capitol in Springfield about his support for a $1-per-pack tax increase on cigarettes in Illinois. Standing with Cullerton is Dr. Douglas Carlson with the Illinois Chapter of the American Academy of Pediatrics. (Capitol News Illinois photo by Rebecca Anzel)

SPRINGFIELD — A pack of cigarettes will cost an extra dollar in Illinois if the Senate approves a bill passed Saturday by the House.

Buried on page 170 of an 800-page bill providing funds for vertical infrastructure projects is a usage tax increase on cigarettes and a new tax on e-cigarettes.

The language calls for increasing the state’s current $1.98 per-pack cigarette tax by $1, and is expected to generate about $159 million in revenue per year, according to advocates. That new money would go toward capital projects including building construction, land acquisition and utilities improvements.

In his February budget outline, Democratic Gov. J.B. Pritzker proposed increasing the usage tax on cigarettes by only 32 cents, about one third of the number approved by the House Saturday.

But Senate President John Cullerton, a Chicago Democrat, and several health groups — the American Lung Association and American Cancer Society’s Cancer Action Network among them — point to studies that show the greater tax bump will “ensure a public health impact of reducing tobacco use is achieved,” according to a fact sheet. A lesser increase would not have that impact, they say.

“Many of the bills that we vote on in Springfield deal with money, and in fact I would say most of them do. Since I’ve been here, the bills that I’ve been most interested in working on are bills that you can vote on where you actually save lives,” Cullerton said at a news conference May 7. “This is another example of that.”

The legislation also incorporates the initiative of Sen. Terry Link, a Democrat from Indian Creek, to include electronic cigarettes — such as e-cigars, vapes or hookahs — in the state’s definition of a tobacco product so Illinois can charge a usage tax on them too.

That tax is set at 15 percent of the wholesale price of such products. It is unclear how much revenue will be generated, advocates say, because there is no regulation on that classification of goods.

The new taxes on both cigarettes and electronic cigarettes would take effect July 1, 2019.

Senate Bill 690, which also includes provisions to legalize sports betting and expand casinos in the state, was approved on a bipartisan vote of 87-27 in the House.

The Senate must now agree to the changes before the bill can move to Pritzker’s desk for his signature.

One part of Cullerton’s original proposals not included in the bill is an increase in taxes on all other tobacco products — including cigars, chewing tobacco and snuff, to name a few — to 64 percent of the wholesale price.

That was an initiative to maintain “parity” so smokers would not turn to other goods containing nicotine if the price of cigarettes went up, Kathy Drea, vice president of advocacy for the American Lung Association, said.

That tax will remain at 36 percent of wholesale price. It is unclear why the second usage tax bump is not included in the measure.

The legislation also strikes from statute a provision that allowed merchants to stockpile cigarettes.

By comparison, per-pack cigarette taxes in most neighboring states are lower: 99.5 cents in Indiana, $1.10 in Kentucky, 17 cents in Missouri and $1.36 in Iowa, according to the Commission on Government Forecasting and Accountability. Wisconsin’s tax, at $2.52, is the only one higher than Illinois’.