Bills that stalled may be reconsidered when lawmakers return Jan. 28 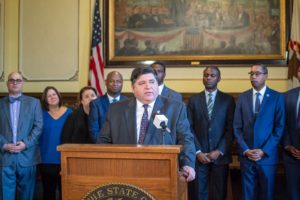 Gov. J.B. Pritzker said during a news conference Oct. 28 in his office at the Capitol in Springfield that Illinois should become the second state to “stand up for giving student athletes their rights in a billion-dollar industry that they helped build.” He gave his support to a bill that would allow college athletes in Illinois to be paid for the use of their likeness. The bill moved out of the House with bipartisan support but failed to gain traction in the Senate during the veto session, which concluded Thursday. The bill’s sponsor, Rep. Emanuel “Chris” Welch, said he was “very disappointed” the bill didn’t pass this year but said he continue the push when the Legislature returns Jan. 28. (Capitol News Illinois photo by Jerry Nowicki)

SPRINGFIELD — The adjournment of the fall veto session Thursday night means a number of bills that failed to pass both chambers this week must wait for further action when the General Assembly returns on Jan. 28.

House Bill 3904, allowing college athletes to be paid for the use of their name and likeness, was one of the most publicized efforts that stalled this week.

Hillside Democratic Rep. Emanuel “Chris” Welch, who successfully moved the bill out of the House with strong bipartisan support in the first week of veto session, said he was “very disappointed” the measure failed to gain traction in the Senate.

Welch, a former baseball player at Northwestern University, said he looks forward “to continuing our fight in January of next year to do the right thing, get this bill signed into law, and give college athletes the opportunity to receive the compensation that they deserve.”

“It’s unacceptable that the NCAA, collegiate athletic conferences and universities are earning billions of dollars every year, while student athletes are prohibited from earning a few extra bucks from working at a meet-and-greet at a local business,” he said in a statement. “I would like to thank Governor Pritzker and all the stakeholders who worked so hard to pass this bill out of the House.”

The Illinois Senate on Thursday approved a resolution asking the federal government to ensure the last surviving Medal of Honor recipient from World War II be offered a state funeral. But the resolution was not taken up by the House before it adjourned later that day.

Charles H. Coolidge of Tennessee and Hershel Woodrow Williams of West Virginia are the only two living Medal of Honor recipients who served in World War II. According to the resolution, 353 Americans received a Medal of Honor for their service in the war.

A state funeral is a national tribute usually reserved for presidents and, less often, other national dignitaries. A president has the sole authority to approve the ceremony for others, and Congress can allow a person’s remains to lie in state in the Capitol rotunda.

“Clearly, the efforts of the Greatest Generation are worth noting, and this resolution says that they should be worth noting with an official state funeral,” he said Thursday.

Senate Joint Resolution 50 passed unanimously in the Senate. Its chief sponsor in the House is Rep. Stephanie Kifowit, a Democrat from Oswego.

A measure that would change Illinois law — but not federal law — when it comes to daylight saving time passed the Senate but stalled in a House committee this week.

As written, Senate Bill 533 calls for setting clocks ahead one hour to daylight saving time on Sunday, March 8, 2020, then leaving the state on Central Daylight Time permanently.

But state Sen. Andy Manar, D-Bunker Hill, said it would not have any actual effect on the state’s time zones unless the federal government took further action.

While two states – Hawaii and Arizona – have been granted waivers from federal law to do away with annual time changes, Manar said his bill does not seek such a waiver.

Thus, even if it does find momentum in the House come January, existing laws will still apply unless a timekeeping change is made nationally.

A bill calling on the Illinois Department of Transportation to study the use of automated red light cameras unanimously passed a Senate committee this week but never got a floor vote.

Those devices, and the contracts that many Chicago-area governments have with the companies that provide them, are believed to be one subject of an ongoing federal corruption probe of several statehouse insiders.

Several lawmakers have called for a ban on the devices, but Senate Bill 1297, sponsored by Chicago Democratic Sen. Emil Jones III, only asks IDOT to study their use and report back to lawmakers “on the overall operation, usage, permit process, and regulation” of the devices, along with any recommendations the agency deems necessary to regulate them.