Published by Capitol News Illinois on May 24, 2019 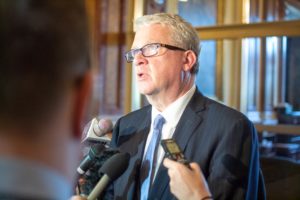 House Minority Leader Jim Durkin (R-Western Springs) tells the media Wednesday in Springfield there is still “no clarity, no consensus” on a range of issues with just seven days remaining in the legislative session. In an interview Thursday with Capitol News Illinois, he added Democrats and Gov. J.B. Pritzker should have focused that conversation on the budget. (Capitol News Illinois photo by Jerry Nowicki)

SPRINGFIELD — There are seven days to go before the scheduled end of session May 31, and the Illinois General Assembly is still debating bills to legalize recreational marijuana, expand gambling and provide funds for infrastructure — all while negotiating a budget.

The four legislative leaders and Democratic Gov. J.B. Pritzker met Thursday for about an hour for a closed-door meeting. A spokeswoman for the governor said the conference was “another productive conversation and collaboration on substantive issues.”

Senate President John Cullerton, a Chicago Democrat, said in a statement these meetings have a “cooperative tone” and he is “cautiously optimistic we will see major accomplishments this session.” His counterpart, Minority Leader Bill Brady, a Republican from Bloomington, called the meeting a “constructive step forward.”

But House Minority Leader Jim Durkin, a Republican from Western Springs, said not enough time was devoted to discussing the budget — almost the entire meeting was spent debating a capital bill.

Last week, Pritzker shared a $41 billion capital spending proposal with lawmakers that relies on new and increased taxes. Those include doubling the motor fuel tax, increasing the tax on alcohol and adding a tax on ride-sharing and streaming services.

“I firmly believe that we have to make an investment in infrastructure, but we should’ve been dealing with the budget first,” Durkin said.

The five men are scheduled to meet again Monday, with negotiations on the budget to continue over the weekend.

Capitol News Illinois: How has the budget negotiation process worked previously, and what’s happened this session?

Durkin: The goal has always been that the four leaders would meet on a fairly regular basis on a lot of issues, but mainly about budget. Despite the acrimony over the past four years between Gov. Rauner and the Democrats, we still met. My disappointment with Gov. Pritzker is we’ve only met three times this year — three times. The most recent was yesterday [Thursday], with some seven or eight days left to be able to get some important things done.

We’re seven days out and we don’t have clarity on a budget. We know that the Senate and the House Democrats are meeting and they’ve not quite been able to reconcile their differences, but what I will say is that there really has been no participation of the administration with my caucus and myself on the budget.

Our greatest responsibility every year is to develop and to pass a budget that is balanced and hopefully one that is negotiated. Last year, which was the last year under Gov. Rauner, we were able to negotiate a bipartisan budget between all four caucuses and the governor. This administration is not taking that same practice and it’s a bit disappointing, and it just makes me think whether or not they actually want Republican votes at the end of the day. The governor has made it very clear, and I took him at his word, that he wanted to solve the largest problems of the state in a two-party, bipartisan manner. I’m not getting that impression as we go into the last week.

CNI: What is the main takeaway in your caucus’s budget proposal?

We don’t have to tax anybody for the purposes of meeting out budget obligation to the state. That’s all we’re saying. This is coming from the governor’s own office that confirms with us that our revenue situation is much better than we think, so we should actually talk about living within our means for the first time in a long time without asking for more from Illinois citizens.

CNI: This time last year, it seemed the big push was for the General Assembly to pass a budget. But this year, the focus is on initiatives such as legalizing recreational marijuana and getting through a capital plan. Why do you think we aren’t hearing more talk about the budget, with seven days to go until the scheduled end of session?

Durkin: In yesterday’s meeting, there was maybe a few seconds that were discussed about budget. Everything else was about capital. I would say that for purposes of what our true priorities should be is to take care of the budget first and then move on to the other issues — capital, gaming, cannabis — but the budget has to be the priority. That’s what affects the day-to-day lives of every person in this state — every family, every businessman, every high schooler, every college kid.

Obviously things have changed dramatically within the last two weeks because of the new revenue that came in and now we feel that we, as I said earlier, the budget should be easy. We can do this and we can actually have this thing balanced without going back to the public trough. But apparently they don’t want to accept what we say because they don’t want to acknowledge there’s a way to do this by the minority party. I think the public would be ecstatic if found out we were able to balance the budget without raising taxes on anything. We can do that.

CNI: Given the number of votes the Republicans have in the House — your members have a superminority — how much weight do you think your recommendations or proposals have with the Democratic leaders and the governor?

Durkin: Our votes mean something, particularly when it comes to some of these big ticket items. We’d like to be part of the budget, but if they don’t need us, if they don’t want our participation or our recommendations, then they’re free to do it on their own. But when it comes to issues that are of other, higher importance, at least these big ticket items, I don’t think that they want to do this strictly on their own and that became very clear yesterday on capital that they need Republican votes. We do have value in this process. We’re in the minority but our votes count. We’ll be willing participants in every proposal as long as we believe we’re given a fair shot and we’re being treated equally, but we’re not going to be undermined. This has got to be a two-way street.