Executive authority in the face of disaster 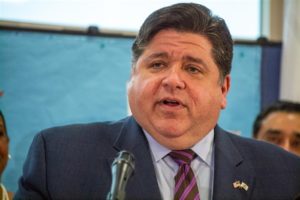 Gov. JB Pritzker speaks at Ridgely Elementary School in Springfield on Feb. 5 to announce the release of the first phase of funding for a matching grant program to increase broadband internet access in the state. (Capitol News Illinois photo by Jerry Nowicki)

SPRINGFIELD — Since Illinois Gov. J.B. Pritzker declared a state of emergency eight days ago, all public and private schools have closed, restaurants and bars have shuttered to sit-down customers, gatherings of more than 50 people have been canceled and the state employee workforce was cut to only its essential numbers.

Granting the governor and Illinois Department of Public Health these powers are two statutes — one effective during times of disaster and the other when a health situation demands certain actions.

When Pritzker signed the the disaster proclamation on March 9 to mitigate the potential effects of COVID-19 — “a novel severe acute respiratory illness that can spread among people through respiratory transmissions and present with symptoms similar to those of influenza” — on Illinoisans, he activated provisions of the Emergency Management Agency Act.

And for at least 30 days, it allows Pritzker to: manage who enters and leaves the state and who can travel within it; appropriate resources as needed; acquire “any personal property as may be necessary;” and block price increases for materials, among other abilities.

In a daily COVID-19 briefing Tuesday, the governor said he refused to use the current situation to “supersede my constitutional authority.”

“Every step that we’ve taken during this crisis, my legal team has understood and laid out our legal authority to do it,” Pritzker said. “Where we felt my authority didn’t extend to some action that we felt we needed to take to keep people safe, we worked with the individuals or entities involved to get to the right answer.”

The Department of Public Health maintains wide authority to “investigate,” “restrict and suppress” the spread of “dangerously contagious or infectious diseases,” according to statute. Officials have “supreme authority” to quarantine or isolate Illinoisans it deems a threat to public health and can restrict access to places to avoid virus spread.

Anyone who “knowingly or maliciously” shares false information about such a virus or ignores a quarantine order is guilty of a misdemeanor.

Several additions to the law were added in 2004 through legislation sponsored by Chicago Democratic Sen. Sara Feigenholtz when she was a representative and then-Sen. Barack Obama.

The changes were modeled after an initiative drafted by the U.S. Centers for Disease Control and Prevention to “ensure that there could be an effective response to an incidence of bioterrorism,” Obama said then. It passed the House and Senate unanimously.

State health officials at all levels are allowed to share medical records and other information to “prevent the spread” of a virus or disease as long as patient privacy is observed.

Local officials, under law, are also tasked with enforcing IDPH orders. If they do not, the department “may enforce such measures as it deems necessary to protect public health, and all necessary expenses so incurred shall be paid by the locality for which services are rendered.”

Thus far, Pritzker has issued five executive orders related to the novel coronavirus. In part, they: