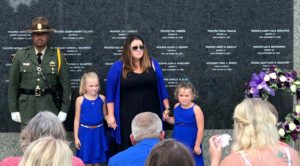 Stacy Ellis and her two daughters attended a memorial ceremony for Trooper Gerald Ellis on Wednesday at State Police Memorial Park in Springfield. Stacy said her husband would be “extremely humbled” to have his name engraved on the wall with the other Illinois State Police officers, “even under the circumstances.” Gerald died March 30 in the line of duty when he intentionally used his patrol vehicle to block a car driving the wrong way down Interstate 94 in Lake County from colliding with a vehicle carrying a family. (Capitol News Illinois photo by Rebecca Anzel)

SPRINGFIELD — The Illinois State Police, family members and dignitaries gathered Wednesday to commemorate Trooper Gerald Ellis in the third such ceremony held at Memorial Park in Springfield in almost as many months.

Ellis died March 30 in the line of duty when he intentionally used his patrol vehicle to block a car driving the wrong way down Interstate 94 in Lake County from colliding with a vehicle carrying a family. He was 36.

Ellis’ name was added to the monument wall, which is “an ever-lasting reminder of the tremendous cost paid at times” for the safety the force is tasked with providing citizens and communities in the state, Jack Garcia said. He is director of the Illinois State Police Merit Board and chairperson of the State Police Memorial Park.

The names are “engraved here for eternity so all our citizens and the visitors to our state can know and hopefully understand what these brave men and women, as well as their families, have sacrificed,” he added.

Kelly said Ellis’ death was difficult for his fellow officers. It came two days after Trooper Brooke Jones-Story was killed while conducting a traffic stop near Freeport in Stephenson County.

“It’s something to see such brave and strong people keeping their chins up but still grasping for answers,” he said. “I remember seeing a few clenched fists, perhaps a bit in anger, but mostly as if they were grabbing onto some imaginary rail or staff to hold themselves up.”

Stacy Ellis said her husband always wanted to be a police officer, and that joining the State Police was his dream job. He was a trooper for 11 years.

“Not only did he gain a job, he gained a family,” she said. “He achieved what we hope in our lifetime to achieve — a job that we’re proud of and that we want to go to every day.”

Ellis was a “small-town boy” who played and worked on his family’s farm, she said, and enjoyed spending time with his two daughters, fishing and hunting.

He was a graduate of Western Illinois University, which he attended while serving in the Army. Ellis completed a tour of duty in Iraq, and he trained in Germany and El Salvador, his wife said.

“He was the living embodiment of the truth that defined his final act on earth: When you have dedicated your life to the betterment of the world, you’re never off duty,” Gov. J.B. Pritzker said. 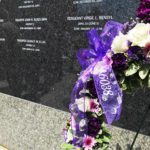 A ceremony was held Wednesday in Springfield to commemorate Illinois State Police Trooper Gerald Ellis, who was killed in the line of duty on March 30 in Lake County. His name was added to a monument in State Police Memorial Park. (Capitol News Illinois photo by Rebecca Anzel) 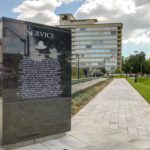 Placed at the entrance to State Police Memorial Park in Springfield is the Officer’s Oath. Visitors must pass it before approaching the Memorial Wall, where the names of troopers who died in the line of duty are engraved. (Capitol News Illinois photo by Rebecca Anzel)

“Jerry was that person who deserved to be recognized not just for what he did, but for who he was: a man for whom ISP’s credo — integrity, service, pride — were more than words; a man who was willing to give his life so that others may live,” Pritzker continued.

Kelly said when he went to the Ellis house to pay his respects he expected to find “the worst kind of sadness.” What he found instead was love.

“I couldn’t help but be reminded of something I’ve heard before — that maybe love is a force in the universe. I’m not sure we can prove it in a court of law, or that our forensic scientists, even as good as they are, can show that within a reasonable degree of scientific certainty, but you and Jerry have shown it,” he said to Stacy. “The force of that love is so strong that it could not be stopped by a wrong-way car or any threat in the night. … That love drives people like Jerry Ellis to serve all, even at the cost of their own life.”

The memorial was, at times, emotional. Stacy said she had a message she wanted to leave with those who attended: “To make sure that everyone values the relationships of your loved ones, because they could be taken at any time. Hug them and tell them how much you love them, and that you truly enjoy their presence.”