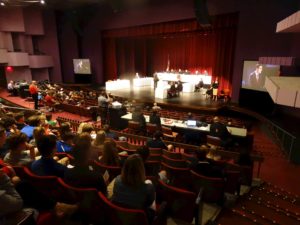 The Illinois Supreme Court holds a rare hearing outside of Springfield as it traveled Wednesday to the campus of Lewis and Clark Community College, in the Metro East town of Godfrey, where it heard oral arguments in two internet-related cases. (Capitol News Illinois photo by Peter Hancock)

One case questions whether a statute dating back to the early 1800s can be applied to daily fantasy sports betting. The other asks whether government can ban someone’s access to social media websites, even if that person is on probation.

The oral arguments took place at Lewis & Clark Community College in Godfrey to “raise the profile of the judicial branch,” Chief Justice Lloyd Karmeier said before the event. It is the second consecutive year such an event was held in his judicial district.

Colin Dew-Becker and Andrew Wu competed in a fantasy sports contest in April 2016 through the website FanDuel. They paid $109 each — a $100 wager and $9 fee to the company. Wu’s NBA fantasy team scored almost double the points Dew-Becker’s team did, making him the winner.

Three days later, Dew-Becker filed a lawsuit to recover his bet. Under a centuries-old Illinois law known as the Loss Recovery Act, those on the losing end of an illegal wager have a legal avenue to get their money back.

The question before the Supreme Court, in this case, is whether that avenue exists when gambling is conducted through a third-party digital fantasy sports website such as FanDuel.

Benton Ring, Dew-Becker’s representative before the court, argued the Loss Recovery Act has no exclusions for such websites. Members of the General Assembly would have added them if that was their intent, he said in a court document.

“That the legislature chose not to do so is plain evidence that it intended for sites such as FanDuel to be included, or at least not excluded,” he wrote.

Such websites act, in a modern sense, like poker houses, Ring said, converting money into a digital currency Illinoisans can use to place bets on the outcome of their fantasy sports teams.

And when a new law expanding gambling takes effect next year, it does not appear it will prevent residents from recovering lost bets under this act, he added.

But William Gantz, Wu’s representative before the court, told the justices that this straight reading of the act — not taking into account its authors could not have imagined the invention of such technology — “could result in millions of cases.”

“This test case seeks a green light for a cottage industry in Illinois — lodging hundreds of thousands of claims against unsuspecting citizens who have been engaging in online (daily fantasy sports) contests in Illinois for at least over a decade,” he wrote in a court document.

The Loss Recovery Act dates back to 1819, according to court documents, one year after Illinois became a state and 40 years before the Civil War. Gantz added it was meant to apply only to bettors who knew each other directly and who were located physically in Illinois.

“If we look to the legislative intent for the Illinois Loss Recovery Act, I mean, that was a pre-Civil War statute. I don’t think the parties or the legislature could have happened to have thought about the internet,” she said. “They presumed, I’m sure, that the gambling would be between two people who knew each other.”

Ring said the law is “fluid” and “should adjust to make those adjustments for how the society is run.”

Gantz urged the court not to get distracted by issues such as whether bettors know each other or whether fantasy sports qualify as gambling — he contests it is a matter of skill, as with chess or scrabble.

Ring concluded by pointing out there have not been many lawsuits under this act and he does not anticipate many more being filed if the justices decide in his client’s favor.

The other case the Supreme Court heard Wednesday pertains to a convicted sex offender and his access to the internet.

Conrad Allen Morger was convicted of sexually abusing a minor and sentenced to four years of probation by a court in McLean County. That came with a mandatory condition he not use specific internet sites.

His representative in oral arguments, Zachary Rosen, said that ban on social networks — Facebook, Twitter, Instagram and LinkedIn, for example — is a violation of the U.S. Constitution’s First Amendment fundamental right to freedom of speech.

In a court document, Morger’s attorneys called barring access to the internet “draconian.”

The attorney general’s office says those on probation have limited liberties, and those limits last only as long as their sentence.

Joshua Schneider, the state’s representative, said legislators added the mandatory probation condition because the state has an interest in protecting the public from sex offenders who are reintegrating into society.

“Certainly the General Assembly need not make probation available as a sentencing option,” he said, adding they could alter the law to make jail time the mandatory sentence instead.

Rebecca Glenberg, senior staff attorney with the American Civil Liberties Union, submitted a brief to the court in support of Morger’s case. In a phone interview earlier this week, she said those on probation cannot reintegrate into society without social media. Such websites serve as a hub for spaces to discuss current events, culture, religion and family, she added.

“Probation is meant to give a person who has been convicted of an offense the opportunity to reintegrate into society and to live a productive and law-abiding life,” Glenberg said earlier this week. “It is almost impossible to do that in today’s world without access to social media.”

Morger did not use the internet to perpetrate his crime. Karmeier asked Schneider why a ban on access to social media was a fitting probation condition in his case and others like it.

Schneider said because the possibility exists for sex offenders to use social networking sites to effectuate in-person crimes, lawmakers had an interest in blocking their access to such tools.

If the court finds the probation condition applied to Morger does not violate the U.S. Constitution, Glenberg said, it can have far-ranging implications.

It would “muddy the waters of Constitutional protection and open the door for lawmakers in this state to test what other classes of individuals may have their rights so restricted,” she wrote in the brief. “… Over time, Illinoisans might find that when the line protecting First Amendment rights is deemed negotiable, the rights to speech and the free exchange of ideas become debatable in previously unthinkable ways.”

Justice Thomas Kilbride was not present for the arguments — he was attending the funeral of a close family friend. Karmeier said the justice would watch a video of the proceedings so he could issue an opinion with the rest of the court.