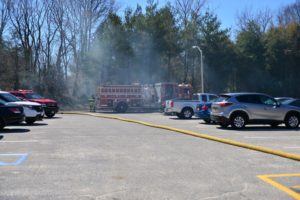 Due to wind direction and speed, a small brush fire ignited in a patch of bamboo on private property behind Tabler Quad and spread onto Stony Brook University property around 11:30 a.m. today, according to Assistant Chief of Police Lawrence Zacarese.

According to Zacarese, the fire was contained to a 20 by 30 foot area and firefighters were able to quickly get it under control. There was no property damage or injuries.