Illinois poised to expand access to abortion, going in the opposite direction of other states 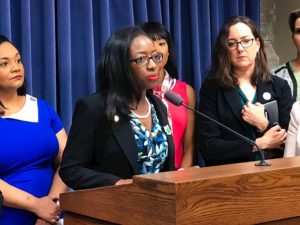 Georgia Democratic Rep. Dar’shun Kendrick speaks during a news conference Wednesday at the Capitol in Springfield. Kendrick and two other out-of-state lawmakers visited the Capitol to encourage Illinois lawmakers to pass the Reproductive Health Act. “We don’t want any other states to have to explain to their constituents why their jobs are disappearing, or why, you know, different economic benefits they had before are not coming through because somebody, usually without a uterus, is trying to regulate your uterus,” Kendrick said. (Capitol News Illinois photo by Rebecca Anzel)

SPRINGFIELD — Legislators from Georgia and Missouri, both states where the legislature recently enacted abortion restrictions, travelled to Illinois this week to advocate for an abortion repeal-and-replace bill that ultimately passed the House on Tuesday and the Senate on Friday night.

If signed by Gov. J.B. Pritzker as expected, the Reproductive Health Act would be the most liberal reproductive health care statute in the country, opponents and proponents agree, and the opposite of what about 10 states have passed so far this year.

Sen. Melinda Bush, a Democrat from Grayslake and the Senate’s sponsor of the measure, called Georgia and Missouri examples of states which “have been ground zero of the national race by anti-abortion legislators to pass the harshest, most restrictive abortion bans.”

Georgia Rep. Dar’shun Kendrick and Sen. Nikema Williams and Missouri Rep. Cora Faith Walker, all Democrats, encouraged Illinois lawmakers to pass the Reproductive Health Act in the wake of the effects they said they have seen in their home states. The three added it would send a positive signal as well.

“I come from a state that’s ready to fight back and we look to places like Illinois for fire and fuel, … a state where dozens, dozens of people have signed up and volunteered to provide transportation to Hope Clinic in Granite City, Illinois, for women who are seeking the care that they need,” Walker said.

But they had another message, too — “elections matter.”

Below is an interview, edited for length and clarity, the lawmakers had with Capitol News Illinois:

Capitol News Illinois: Did you have a sense the abortion restriction law recently passed in your state was coming, or was it a surprise?

Sen. Nikema Williams (Georgia): Our current governor told us exactly what he was going to do when he was running for governor: He vowed to sign the strictest abortion ban in the country. And so when people act surprised that it then happened, when people sat on the sidelines and didn’t show up to vote or they didn’t do everything that they could to make sure that we got someone in office that was going to protect reproductive health access for women, it’s not really a surprise.

CNI: Senator, you’re originally from Alabama and worked in that state’s legislature with Planned Parenthood. What do you think about the law there? 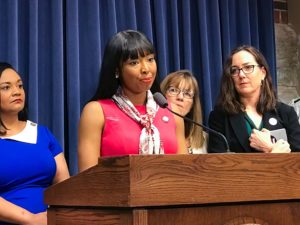 Missouri Democratic Rep. Cora Faith Walker speaks during a news conference Wednesday at the Capitol in Springfield. Walker and two other out-of-state lawmakers visited the Capitol to encourage Illinois lawmakers to pass the Reproductive Health Act. “I come from a state that’s ready to fight back and we look to places like Illinois for fire and fuel,” Walker said of the difference between recent abortion bills in the neighboring states. (Capitol News Illinois photo by Rebecca Anzel)

Williams: Just thinking about the bill that they passed that has no exceptions for rape or incest — I cringe to even say that. One in four women in their lifetime will have an abortion and we don’t need to know why because it’s none of our business. And that’s not Democratic women, that’s not Republican women — that’s women period.

I think that’s what the proponents of abortion bans across the country are forgetting, because these are women that they know. These are women that they love and care about. They just don’t tell them because it’s none of their business and because they know how they feel about it, but it doesn’t mean that abortions aren’t happening in their communities, in their party, in their churches, in their families. I’m grateful for states like Illinois, who are looking at this from a reproductive health aspect and making sure that women get the care they need.

CNI: What about the Reproductive Health Act here in Illinois do you think is the most important or most impactful?

Rep. Cora Faith Walker (Missouri): I’m from Missouri, so all of it is important. A friend of mine is now working for Hope Clinic in Granite City. The day that the [Missouri] Senate passed the abortion ban, they started a Google Sheet to find people to sign up to provide transportation for folks, and dozens of people have signed up. I talked to someone just [Tuesday] who said they did their first transportation last week to the Hope Clinic and dropped the woman back off at the shelter she stayed at. Coming from a neighboring state who is hours, possibly, away from banning all access to safe and legal abortion, it’s vital. It’s crucial. The idea of being able to just go 20, 30 minutes outside of St. Louis, to a place where there is not the stigma to get the health care women need, it’s critical.

The thought and the idea of the sole and the very last provider losing their license by the end of this week just really drives home the importance of what’s going on here in Illinois for people in the Midwest region, especially for the 1 million people of reproductive age in Missouri who are hours away from losing access to health care.

Rep. Dar’shun Kendrick (Georgia): And to underscore that, what I’ve been telling people is abortion is a part of health care. For some reason, people think of it as separate.

CNI: Why was it important for each of you to come to Springfield?

Walker: Missouri is hours away from becoming the first state in the Union without an abortion provider. The governor signed Missouri’s law — he had until June 14, but he signed it last Friday before Memorial Day, after a tornado had hit the Capitol, in a private ceremony. This is a priority for them.

I want to let the people of Missouri know that Illinois is right here. There are people who are supportive of them and will help them if they need help. Missouri is next to Illinois. And if people need access to health care, there are a lot of folks that are out there that are willing to help. And I’ve got to call Missouri out because this is just not an exercise in courage of leadership by any means.

Williams: I want to make sure that women know that there are safe places that they can go to get the care that they need, and that it’s going to be safe, legal and available. I’m grateful for states across the country like Illinois, who are looking at this from a very different perspective, and making sure that we are expanding access to care, not just here, but across the country, because your access to health care and your constitutional rights should not depend on your ZIP code.

And I want to remind Georgians that elections have consequences. The governor told us exactly what he was going to do when he was running for office, and not enough people listened to him. As we look toward 2020 — we have state legislative elections every two years — I want everybody to know what is possible when we change the makeup of our legislative body. We are going to be focused on that in Georgia to make sure that we elect people that are listening to people in the state. Democracy doesn’t start and stop on election day. I want to make sure that they see the possibilities of what happens when you elect people to office that believe in your autonomy.

Rep. Kelly Cassidy (Illinois): If I can jump in here, what we did here (Tuesday) and over the last two weeks is living proof that elections have consequences. The brick got lifted off this bill because of all the women that we elected in that last round, and the governor that we elected kept pushing and pushing and didn’t give up; and all the activists who’ve been here and the Handmaids who have been here for months. This was 100 percent about what this last election did to this building. No question. 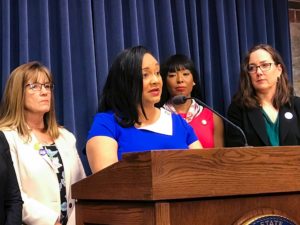 George Democratic Sen. Nikema Williams speaks during a news conference Wednesday at the Capitol in Springfield. Williams and two other out-of-state lawmakers visited the Capitol to encourage Illinois lawmakers to pass the Reproductive Health Act. “Our current governor told us exactly what he was going to do when he was running for governor: He vowed to sign the strictest abortion ban in the country,” Williams said. (Capitol News Illinois photo by Rebecca Anzel)

Kendrick: As soon as the bill passed, you might have heard that there were Hollywood studios and people talking about boycotting. People ask me all the time if I really think it’s going to happen, and I tell people, “You are responsible for the consequences of this bill. We told you what was going to happen.”

Georgia has a thriving film industry. I am seeing now that the boycott threats are starting to trickle their way down to my constituents’ pockets — the ones who are supplying the food on the sets, or the people who are doing the hairdressing, or maybe they’re contracting out their houses. Talking about reproductive health is going to have an economic effect. I am seeing how it’s really starting to affect Georgia, and I think it’s only going to get worse, unfortunately. We don’t want any other states to have to explain to their constituents why their jobs are disappearing, or why, you know, different economic benefits they had before are not coming through because somebody, usually without a uterus, is trying to regulate your uterus.