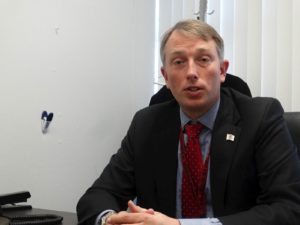 State Rep. Patrick Windhorst said much of his outlook on legislation will be shaped by economic and social conditions in southern Illinois. (Capitol News Illinois photo by Peter Hancock)

Rep. Patrick Windhorst, a freshman from Metropolis and a former Massac County state’s attorney, proposed to outlaw the procedure in Illinois once the fetus becomes viable, except when a woman’s life or “major bodily function” is threatened.

“This bill is an effort to protect the life of an unborn child after the point when they can survive outside the womb, when basically you’re just talking about an issue of location — when the child is deemed protected by the law or not,” he said. “Now, obviously there’s going to be times when there may be a serious physical health reason that would justify the procedure, and that’s why that exception is included in the law.”

According to his measure, a “medical emergency” and “major bodily function” includes normal function of the immune, digestive, neurological, respiratory and circulatory systems, among others.

His bill does not provide an exception for protecting the mental health of the mother.

“My hope would be that there would be a limitation on late-term abortions for only when it is truly a medical emergency for the woman to protect her life, or serious physical health,” he said.

The bill specifies a doctor who violates the act would be committing a felony, which is also part of current state law, and could lose his or her license. It also creates an avenue for the woman, her husband or the woman’s parents to file a lawsuit and receive financial awards for “psychological and physical injuries.”

Julie Lynn, manager of external affairs for Planned Parenthood of Illinois, said the vast majority of abortions occur very early during a pregnancy. When they occur later, it is almost always because a woman’s health or life is at risk, or because the child cannot survive.

“There is no such thing as an abortion up until birth. It’s simply not how medical care works, and it’s frankly irresponsible to imply that it is,” she said.

Democratic lawmakers filed legislation Wednesday, after announcing intentions to do so at a news event in Chicago, to repeal Illinois’ abortion law and replace it with more up-to-date language.

Their effort follows Democratic Gov. J.B. Pritzker’s pledge to make the state “the most progressive state in the nation for access to reproductive health care,” according to his spokeswoman Jordan Abudayyeh.

Windhorst also is a sponsor of legislation to repeal a law that allows for tax dollars to be spent on abortion procedures that was signed two years ago.

This legislation is House Bill 2384.