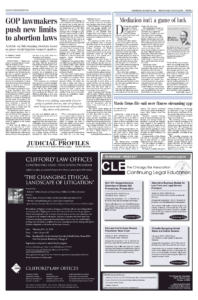 The Chicago Daily Law Bulletin published this piece in print on Wednesday, Jan. 24, 2018.

Published by the Chicago Daily Law Bulletin on Jan. 24, 2018

Months after the mostly Democratic legislature expanded access to the procedure, a pair of bills now percolating in the General Assembly aim to prohibit abortions if based on genetic anomalies.

One of the measures introduced this month, House Bill 4210, would prevent the termination of a pregnancy if the reason the procedure is sought is because of a fetal diagnosis of Down syndrome.

The measure, proposed by Crystal Lake Republican Rep. Allen Skillicorn early this month, amends the Abortion Law of 1975 to make it illegal for a doctor to perform an abortion if a woman is “seeking the abortion solely on account of the fetus having a test result indicating Down syndrome, a prenatal diagnosis of Down syndrome or any other reason to believe that the fetus has Down syndrome.”

The legislation creates a cause of action against physicians who violate the bill and adds language to warn that doctors would also be guilty of a Class 4 felony and at risk of losing his or her license. No fault would be assigned to the woman under the bill.

“I think that all children are unique and precious and I don’t think that having a Down syndrome diagnosis should be a death sentence,” Skillicorn said. “This bill just instructs doctors what’s appropriate and what is not, and I think it’s a discussion worth having.”

Another proposal in the General Assembly expands on Skillicorn’s bill. House Bill 282, proposed by Rep. Barbara Wheeler, also a Crystal Lake Republican, outlaws an abortion sought because of a “fetus’[] race, color, national origin, ancestry, sex or diagnosis or potential diagnosis of the fetus having Down syndrome or any other disability.” The bill was introduced in January 2017.

Both measures are considered long shots in a General Assembly controlled by Democrats and which only recently approved legislation, House Bill 40, that allows public funds to pay for abortions. But the bills introduced by Wheeler and Skillicorn shed light on how some conservatives in Illinois feel about the issue and highlight legal debates playing out across the rest of the country.

“Whether you are in favor of or against the bills, what makes this a challenging constitutional question is that the restriction is tied to the reason the person is seeking an abortion rather than the timing of the abortion,” James C. Geoly, partner at Burke, Warren, MacKay & Serritella P.C., said. “It is a whole different axis of analysis.”

Skillicorn said the language he used to draft his bill mirrors that of an awaited law in Ohio that was recently signed by Republican Gov. Jon Kasich and set to take effect March 23. It is unclear if a legal challenge will be brought to question the constitutionality of Ohio’s upcoming law, but Gary Daniels, chief lobbyist of the American Civil Liberties Union of Ohio, said in an e-mail the group “believe[s] it is unconstitutional and our legal staff continues to analyze it.”

According to Elizabeth Nash, senior state issues manager at the Guttmacher Institute, Wheeler’s proposal more closely follows the language of a law in Indiana. The institute is a research group that supports female reproductive health and rights.

“For this [c]ourt to hold such a law constitutional would require it to recognize an exception where none have previously been recognized. Indeed, the [s]tate has not cited a single case where a court has recognized an exception to the [U.S.] Supreme Court’s categorical rule that a woman can choose to have an abortion before viability,” Pratt wrote in the order granting the preliminary injunction, in June 2016.

“This is unsurprising given that it is a woman’s right to choose an abortion that is protected, which, of course, leaves no room for the [s]tate to examine the basis or bases upon which a woman makes her choice,” the opinion holds.

Pratt placed a permanent injunction on the law last fall, and the state declined to appeal it.

Louisiana passed a similar law in June 2016, but it is also being challenged in court.

Only one state in the country has a law similar to the ones in Indiana and Louisiana that is still in effect — North Dakota. It was passed in 2013, and though initially challenged in MKB Management Corp. v. Burdick II, the plaintiffs later dropped their case because it was unclear the law would directly impact women seeking an abortion at their clinic.

The legislation in Ohio and Illinois specifically looks to prevent abortions based on the possibility of Down syndrome. The laws in Indiana, Louisiana and North Dakota, meanwhile, are part of a model bill promoted by the group Americans United for Life that takes aim at race, gender and a multitude of other factors.

Brigid Leahy, senior director of Public Policy at Planned Parenthood of Illinois, said she was concerned about any kind of legislation that questions a woman’s motive for an abortion.

“Once you start getting into a woman’s decision-making and saying one reason is valid but another is not valid, then are you going to start silencing patients and doctors,” she said. “This is very chilling, especially if you’re going to punish doctors, who are going to start being nervous and hesitant about what they share with patients and how far they can have a conversation with a patient.”

Jenna Prochaska, staff attorney with the ACLU of Illinois, said she does not believe either of the bills in Illinois will be approved, but added the group is still keeping an eye on both proposals because it believes both are “inconsistent with the values of the state” and are unconstitutional.

“The ACLU stands against all forms of discrimination but I think it’s important to realize that that’s not what these bills are about — they’re seeking to impose additional abortion restrictions, particularly in a time when the state of Illinois has stood up and said clearly that we’re not going back to the days of illegal abortions,” she said.

This latest proposal comes on the heels of the 45th anniversary of the Roe v. Wade decision, announced Jan. 22, 1973.