Signing ceremony to be held in Chicago 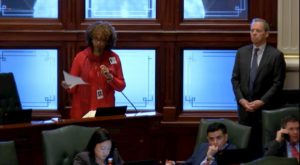 Camille Lilly, a Democratic representative from Chicago, speaks March 12 on the House floor during debate over legislation she sponsored that raises the legal age to purchase tobacco products to 21. Watching Lilly is Senate President John Cullerton. Lilly’s bill, House Bill 345, passed the House that day and later was approved by the Senate. Gov. J.B. Pritzker will sign the bill into law Sunday during an event in Chicago. (Photo credit: BlueRoomStream)

SPRINGFIELD — Gov. J.B. Pritzker will sign into law a statewide initiative that raises from 18 to 21 the minimum age to purchase tobacco products.

The signing ceremony Sunday in Chicago marks the end of a four-year effort by lawmakers and advocates to change the age to buy products containing nicotine — including cigarettes, e-cigarettes, vapes and chewing tobacco, to name a few.

Pritzker will be joined by the bill’s sponsors, Democrats Camille Lilly, a representative from Chicago, and Julie Morrison, a senator from Deerfield.

“When things get out of hand or are no longer tolerable, the people speak, and we as legislators come to bring that message and advocate,” Lilly said when the legislation passed the Senate in mid-March. “I get to have this be part of my history. I believe this is one of those bills that saves lives.”

The measure’s passage comes as a victory for lawmakers and advocates, who have seen it succeed in the Senate in past years only to fail in the House.

Supporters say those who do not begin smoking before the age of 21 are less likely to start later.

But opponents historically made the same major argument against changing the law — that if 18 is old enough to vote in a political election, get married, open a bank account and join the armed forces, it should also be old enough to purchase and smoke a cigarette.

Detractors also were unhappy this session with the removal of language from current statute penalizing minors caught with tobacco products. They presently risk the possibility of taking a “smoker’s education or youth diversion program” with their parents, as well as the possibility of fines or community service.

The signing ceremony for House Bill 345 is scheduled for 1:30 p.m. at the Mile Square Health Center on South Wood Street in Chicago.