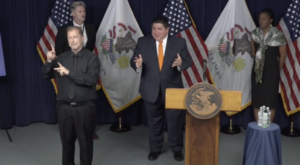 Illinois Gov. J.B. Pritzker (center) tells reporters that the state will not meet its daily novel coronavirus testing goal this week as expected at a virus update in Chicago Wednesday. Being able to process 10,000 tests per day is important to get an accurate picture of COVID-19 cases in Illinois, he said. (Credit: BlueRoomStream.com)

According to medical and scientific experts, he said, processing 10,000 tests per day will give officials the clearest picture of how many confirmed COVID-19 cases are in the state and how it is spreading.

The five machines, distributed to Illinois’ three state-run labs, are not giving technicians “the level of output that we want to see,” the governor said.

“More importantly, these tests are not producing valid results in a way that meets our exacting standards,” Pritzker added. “I am as impatient as the rest of you are, wanting to increase testing, but I will not sacrifice accuracy for the sake of speed. The tests and results they will provide are too important.”

Until those machines are operating correctly, the governor said they will not be used to examine Illinois tests.

“I want to be clear with all of you that we are choosing the best path, but not necessarily the easiest path,” Pritzker said.

At the same briefing Wednesday, the Department of Public Health announced Illinois has 15,078 confirmed cases of COVID-19, up 1,529 cases over the last 24 hours.

The novel coronavirus is present in 78 counties — Stark County is the latest to report a case.