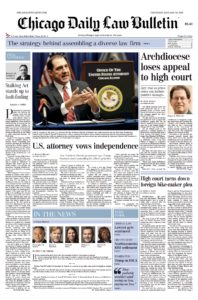 The Chicago Daily Law Bulletin published this piece in print on Thursday, Jan. 25, 2018. The jump is below.

Published by the Chicago Daily Law Bulletin on Jan. 25, 2018

SPRINGFIELD — The state’s top court has denied a Taiwanese bicycle-maker’s plea to avoid liability after a woman’s bike fell apart during a ride in Iowa.

Illinois’ top justices denied the manufacturer’s appeal to be removed as a defendant in the lawsuit stemming from a 2013 incident during the Register’s Annual Great Bicycle Ride Across Iowa, or RAGBRAI.

The case is one of 187 appeals that the Illinois Supreme Court denied last week. It agreed to take up nine cases.

An appeals panel last fall ruled the company had enough of a presence in the state to be sued. The 1st District Appellate Court acknowledged that while even the U.S. Supreme Court has had trouble deciding how to hold nonresidents liable in court, the company in this case clearly met the threshold. 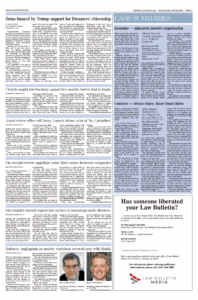 The jump is under the fold.

Janet Kowal, the plaintiff, purchased a Giant-brand bicycle from an authorized retailer in 2007 and had work done on it at another authorized retailer before her participation in the 468-mile RAGBRAI ride. During the event, the carbon-fiber front fork of her bicycle broke, leading Kowal to fall.

Kowal was airlifted to the University of Iowa hospital and was diagnosed with a fracture of one of her cervical vertebra, a displacement of one of her clavicles and the breaking of one of her thumbs. Court papers says she still suffers pain from the fall.

She sued both the retailers, as well as U.S.-based distributor Giant Bicycle and the Taiwan-based Giant Manufacturing Co. Her attorneys argued the Taiwanese bicycle-maker knowingly placed its products in the American market to be made available to Illinois customers and therefore could be held responsible in the state’s courts.

The manufacturing company had filed a motion to quash service from Kowal’s suit, but Cook County Associate Judge Daniel T. Gillespie ruled the company could be sued in Illinois and denied the company’s motion. The 1st District Appellate Court initially declined the company’s appeal, but the Supreme Court told the panel in January 2016 to take it up.

Last fall, the tribunal agreed with the trial court, ruling that state courts here had jurisdiction over the company because it deliberately targeted and sold products in Illinois. Justice Jesse G. Reyes authored the majority opinion, noting the company had approximately 40 retailers in the Prairie State and had acknowledged it was aware of sales here as early as 1988.

The attorneys representing Giant Manufacturing appealed the 1st District Appellate Court’s decision, arguing there are due process issues with subjecting the bicycle-maker to the Illinois courts.

Scott L. Howie, partner at Pretzel & Stouffer Chtd., who represented the company, declined to comment, but argued in the petition that the court misconstrued the actions of Giant Bicycle and Giant Manufacturing.

He also took umbrage with the court’s suggestion that the hiring of a local attorney equated to an aspect of personal jurisdiction.

“Indeed, perhaps the most chilling aspect of the appellate court’s decision is the remark that personal jurisdiction is reasonable here because Giant Manufacturing has ‘local counsel’ — apparently a reference to the attorneys who have challenged jurisdiction,” according to the petition. “Any defendant, whether resident or foreign, ought to be able to retain local counsel to protect its due process rights without having that counsel used against it as evidence that jurisdiction is reasonable.”

In asking for the high court’s review, Howie’s petition pointed out that the U.S. Supreme Court has struggled with the same issue that came before the appellate court — defining stream-of-commerce theory, the idea that a company sells its merchandise under the assumption those products will be purchased and utilized by customers of a certain market.

Previous high court decisions have split over whether nonresidents should be held liable only if they target and design products for a certain market, or if they’re merely aware their products are sold in a jurisdiction.

“The same personal jurisdiction issues that animate this case have bedeviled the highest court in the land for a quarter-century, preventing it from reaching a majority, let alone a consensus,” according to the petition. “These complex issues reflect concerns that are of [c]onstitutional dimension and warrant this [c]ourt’s review.”

The petition filed on behalf of Giant Manufacturing did not make any mention of a point made by Kowal’s attorneys that the appellate court found convincing — there are two employees that are on the boards of both the bicycle-manufacturer and U.S. distributor.

In its opinion, the court found the presence of the “top management employees” at both companies helped to establish minimum contact in Illinois.

“I thought that their failure to ever acknowledge that there’s a shared board of directors and shared employees of the companies shows how specious the argument was,” said Kenneth A. Hoffman, founding partner of Mitchell, Hoffman & Wolf LLC who represented Kowal. “They never acknowledged them, they tried to keep that information from us throughout the course of the discovery and their failure to mention it in their brief seeking the petition from the Supreme Court shows that they were not being entirely forthright at any point in the strong connection that they had to Illinois.”