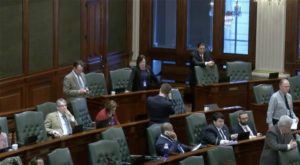 State Rep. Monica Bristow, D-Godfrey, speaks during debate Tuesday on the House floor at the Capitol in Springfield. The House on Tuesday voted overwhelmingly to override the governor’s veto on a bill that would restore and retroactively apply a tax break for aircraft parts. An override vote now must be approved by the Senate. (Credit: blueroomstream.com)

Democratic Rep. Monica Bristow, of Godfrey, said it would protect more than 3,700 jobs at 14 aviation facilities in 12 communities across the state. She added 36 other states have similar laws on the books.

The chamber “sent a strong, bipartisan message that we value good-paying jobs in our state and will do what it takes to protect them,” Bristow said in a statement.

The tax exemption was in place since 2010, but it expired without regulatory or other official bodies taking note, Bristow said. Aviation repair companies consequently did not collect the tax from jet owners during that period.

Without the new law, those companies would need to repay $50 million in taxes to the state, Gov. J.B. Pritzker said in his veto message, the initiative “is not in line” with improving Illinois’ economy.

“Giving private aircraft companies tens of millions of dollars in past due tax forgiveness is not the right fiscal decision for our state as we face billions in debt associated with unpaid bills, a multi-billion-dollar structural deficit, and critical needs in schools and public safety services,” Pritzker said in his letter to the General Assembly.

The governor also said passage of the bill would result in a $10 million tax break for aviation repair companies annually over the next five years.

It would be “absurd” to ask businesses to recover those taxes retroactively in November, said Senate sponsor Rachelle Crowe, a Democrat from Glen Carbon, in November when the General Assembly passed the bill initially.

And Bristow said the measure is ultimately protecting jobs.

“While some party leaders may not have wanted me to do this, I overrode the veto of the governor because he chose to misrepresent this issue and play politics with legislation that directly impacted hundreds of local jobs in the Metro East that people depend on to support their families,” she said in a statement

The override of Pritzker’s veto of House Bill 3902 was approved in the House with 107 votes in favor and none against. Only two lawmakers — Democrat Jaime Andrade Jr., of Chicago, and Republican Norine Hammond, of Macomb — voted present.

The Senate has 15 days to call the vote for an override. As in the House, a two-thirds vote is required for an override. The bill passed 48-1, with two senators voting “present” and eight not voting on Nov. 14 during the fall veto session.