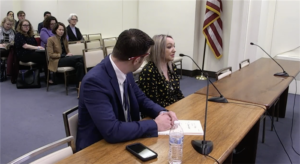 Cassandra Tanner-Miller speaks to a House panel Wednesday at the Capitol in Springfield about the domestic violence incident that claimed the life of her 18-month-old son in 2019. Sitting with Tanner-Miller is state Rep. David Welter, R-Morris, whose bill to create a task force to close criminal justice loopholes in domestic violence cases was advanced Wednesday by the committee. (Credit: blueroomstream.com)

SPRINGFIELD — State lawmakers on a human services panel were visibly emotional Wednesday as they listened to a domestic violence survivor recount how her estranged husband killed her 18-month-old son.

Cassandra Tanner-Miller was standing in her kitchen in September 2019 when “this monster” entered her home through the back sliding doors, asked if she and her two children were “ready to die today” and beat her “relentlessly” and “violently.”

He shot her son, Colton, 10 times in the head before Tanner-Miller came to and, with “a mother’s strength,” she said, ran with her daughter, then age 9, out of the home to a neighbor’s garage as her estranged husband was shooting at them. He later turned the gun on himself.

“I followed everything I was supposed to do to escape this monster, … and realized while I held my son for the last time … that I had to be the voice for so many who have fallen before me in the hands of an abuser,” Tanner-Miller said. “I needed to make sure that my son was not just a number that people tally on a sheet on statistics when there are things that we could be doing in the state of Illinois to protect, to serve and to ensure that Illinois has a future for families.”

She asked the 12 representatives on the committee to approve the Domestic Violence Task Force Act, which would “incorporate all aspects that failed not only my family, but every single other family that has experienced domestic violence in any way, shape or form.” The commission did so unanimously.

Proposed by Morris Republican Rep. David Welter and supported by 84 other legislators from both parties as co-sponsors, the task force would reform Illinois’ criminal justice system by pinpointing loopholes in the enforcement of domestic violence laws and close them. Ultimately, according to the bill, the state’s laws would better protect those subjected to such abuse and apprehend perpetrators.

The 20-member task force would also consider creating a specialty court to handle domestic violence cases — such as those that exist for drug offenses and mental health matters — and carve-outs for bail in such trials.

“By working together to identify and correct the lapses in our laws that heighten the risk for more women and children to be abused or killed, we can honor the life of every victim of domestic violence in the State of Illinois and save others from suffering a similar fate,” Welter said in a statement. “This is our moment to make clear that the people of Illinois will no longer tolerate domestic violence to take innocent lives, devastate families, and harm communities in every corner of our state.”

Rep. Joyce Mason, a Democrat from Gurnee who serves on the committee, told her colleagues she “strongly support[s]” the bill as both a domestic violence advocate and survivor.

She said she was sponsoring a package of related measures addressing “little, tiny things” in current law, but she admitted that is not broad enough to prevent the rash of violence in Illinois.

According to the National Domestic Violence Hotline, about 24 people are victims of domestic violence per minute in the United States, affecting more than 12 million women and men each year.

“We’re grasping at things like, how do we fix this, and tweaking little things and we need to get to the root of this epidemic,” Mason said. “We need to do a comprehensive study to figure out what can be done to change our culture. It’s a big ask — it might be an impossible ask — but we’ve got to start somewhere.”

The legislation is House Bill 4262. It is dedicated to Colton Miller’s memory and “the countless lives that have been lost as a result of domestic violence,” according to the bill.