Plan backed by Senate president is triple one proposed by governor

Published by Capitol News Illinois on May 16, 2019 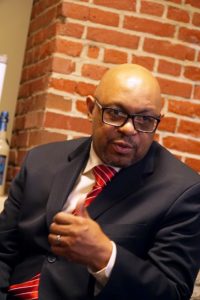 Rep. Thaddeus Jones, D-Calumet City, says although he is not a smoker, he opposes a proposal by Senate President John Cullerton, D-Chicago, to raise the usage tax by $1 because politicians “shouldn’t be the ones to take that choice away.” (Photo by Lee Milner of Illinois Times)

SPRINGFIELD — A Democratic state lawmaker called Senate President John Cullerton’s proposal to raise Illinois’ usage tax on tobacco products “too unreasonable” at a time when the General Assembly is considering a slew of other tax hikes.

Cullerton announced last week he wants to increase the state’s tax on a pack of cigarettes by $1, to $2.98. That is about triple the 32 cents Democratic Gov. J.B. Pritzker introduced in his budget proposal.

The Senate president’s initiative would also include a 64 percent bump on the wholesale price of other tobacco products, including cigars, chewing tobacco and snuff.

But Rep. Thaddeus Jones, from Calumet City, said that plan would turn Illinois into a “job creator” for surrounding states.

“I appreciate President Cullerton for his advocacy, but this is the wrong way to go. We’ve gone through several phases of taxing cigarettes that now is driving businesses and driving people away from Illinois and driving them to border states, and we’ve got to stop it,” Jones said. “It’s not having the effect that the president wants. It’s not stopping people from smoking. What it’s doing is making people in my community who can least afford it, who are on a fixed income, choose to go to Indiana to make sure they get cigarettes.”

His constituents are already travelling to Indiana to get gas and groceries, he said. Some purchase tobacco products there as well.

That is an argument Cullerton addressed at a news event last week.

“But what we also know is that other states then see what we do and then they can go and change their own rate, their own laws,” he said at the time. “And so, it has somewhat of an effect, but it’s not enough of a reason to not do a statewide change in my opinion.”

Cullerton is a longtime champion of measures including Smoke Free Illinois and Tobacco 21.

According to the Commission on Government Forecasting and Accountability, the usage tax on cigarettes in Indiana is 99.5 cents, in Kentucky it is $1.10, in Missouri it’s 17 cents, and it’s $1.36 in Iowa. Wisconsin’s tax, at $2.52, is the only one higher than Illinois’.

But according to data from the American Cancer Society’s Cancer Action Network, most cigarette consumers will resume purchasing their product of choice from a local retailer after experimenting with options to avoid paying higher prices.

The Network supports the $1 increase, as opposed to the governor’s 32-cent proposal, because of studies that show a larger tax jump “will ensure a public health impact of reducing tobacco use is achieved, despite industry attempts to offset the price increases and keep prices low,” according to a fact sheet.

Jones said he wants the Legislature to do “what’s practical,” and that Cullerton “needs to hit the pause button” on this proposal.

He said the 32-cent increase initially introduced by Pritzker also is too high, but is a better starting point than $1. He would prefer any usage tax increase to be staged at a five- or 10-year period so businesses have the opportunity to adapt.

That is a plan Bill Fleischli, executive vice president of Illinois Petroleum Marketers Association and the state’s Association of Convenience Stores, said would be better than an immediate jump.

“Certainly we don’t like any increase, but a gradual increase would give other states the time to think about keeping up with us,” he said.

The association, he added, opposes a cigarette tax hike.

“They support it because research shows it encourages people to quit smoking or, even better, never start, which would save taxpayers millions of dollars in reduced health care costs,” he said in an emailed statement. “That has always been the Senate president’s motivation, and it appears that’s why the public supports it, too.”

But Jones said he does not believe the House could successfully pass the usage tax bump, even if the Senate votes yes.

A spokeswoman from Pritzker’s office said “the governor supports President Cullerton’s proposal and looks forward to ongoing negotiations with lawmakers in the Senate and House.”

Cullerton has not officially filed legislation to raise the tax on cigarettes and other tobacco products, but is expected to do so next week.