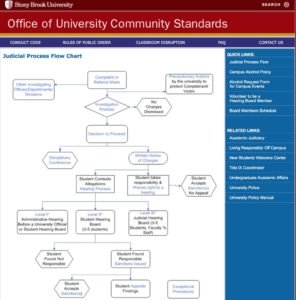 Amidst an ongoing federal investigation into Stony Brook University’s handling of Title IX cases, many students are unfamiliar with the law and the method by which SBU investigates sexual harassment/violence claims that occur on its campus.

“Title IX—it sounds familiar but I can’t say what it is,” Mark Szklonicki, a junior health science major, said.

Other students, like junior biology major Ava Cazabonnet, junior psychology major Trini Joseph and senior mechanical engineering major Yash Vardhan Sharma, did not know what Title IX was, nor had they heard about the law or the investigation process before.

Due to what seems like a general lack of information and understanding in terms of Title IX and reporting sexual assault and harassment at Stony Brook, The Statesman compiled its findings in relation to the matter.

As part of the 1972 Education Act, Title IX is a federal clause prohibiting discrimination based on gender at any federally-funded educational institution, including about “16,000 local school districts, 3,200 colleges and universities, and 5,000 for-profit schools as well as libraries and museums,” according to the United States Department of Education website.

Stony Brook is a member of the State University of New York system and receives monetary support from both the state and federal government. Therefore, the institution must follow the rules outlined by Title IX.

The United States Department of Education’s Office of Civil Rights opened an investigation into Stony Brook on Wednesday, July 23, 2014. Because the investigation is open and still ongoing, neither the University nor the OCR can comment on its progress or findings.

Each year, university police departments are required to release an annual Clery Report. The report details all crimes that occurred on campuses and includes sexual assault-related crimes.

The 2014 Clery Report, which Stony Brook’s UPD released at the ending of September, states that on-campus rapes were reported six time in 2013. In addition, rapes that occurred in residential facilities  were reported five times last year. These reports have gradually increased over the last three years according to the Clery Report.

However, it is unknown whether reports have increased due to more rape or sexual assault related incidences at Stony Brook or because more victims are reporting these cases.

Despite the Clery Report and Stony Brook’s efforts towards educating students about Title IX, some students said universities are often hypocritical when they fail to disclose its own mistakes.

“The authority contradicts themselves and covers up what actually happens like incidences where Title IX is violated and [it’s] just for the sake of reputation,” Veronica Bognot, a junior philosophy and comparative literature major, said.

A university’s transparency regarding Title IX violations or sexual assault-related reports not only indicate its safety but also provides insight on how these incidents are handled.

“Telling the truth about high numbers makes a school safer, in my opinion, because it means they’re less likely to hide the truth, which is always a safer policy.  Schools with low numbers are dangerous because it means they are either discouraging victims from reporting and/or handling the cases under the radar,” Wendy Murphy said. “Both approaches put women at greater risk and send the message that violence against women is acceptable because the school will not take effective steps against offenders and or openly address and shame the behavior.”

According to the chart, those making a complaint have 30 days to do so and can choose to go to the University Police Department, Office of Community Standards or the Title IX Director. From there, a University employee from the Division of Student Affairs office conducts an investigation into “whether further action is necessary.” This includes getting accounts of the situation from the alleged victim and assailant and any witnesses.

There are two possible outcomes at this point. In some cases, a written notice will be sent to the accused student notifying him or her of the specific charges and a hearing will be scheduled no sooner than ten days after that notice is sent. It is unclear if the written notice is sent out by post or by email.

The accused can “take responsibility” and waive the right to a hearing and accept the sanctions, according to the chart. If the student chooses to contest the allegations, he or she can appeal to start a hearing process. The type of hearing varies based on the severity of the accusation.

The information presented in the chart seems to hold that any incident will always be between students but does not mention any changes in the process if one of the involved parties is, for example, a staff or faculty member.

Despite this lengthy process, many Stony Brook students are not aware of the initial steps of reporting a Title IX-related incident.

“I know that there is a hearing but, I didn’t know that it went through people who were running the Title IX stuff,”  senior psychology major Adil Ahmed said.

Murphy said in an e-mail she does not know of any university that “complies fully with Title IX.”

There are a number of misconceptions surrounding Title IX—chief among them is the idea the clause only pertains to athletic programs at federally-funded higher education institutions.

Three others, as defined by an ESPN article, are that schools to must cut a number of male teams; Title IX ensures opportunities for female and male players are equal; and the monetary resources devoted to male and female teams must be equal.

According to the article, “schools must decide where to spend their money. And often, when they decide to cut non-revenue men’s sports—such as wrestling, swimming and tennis—it’s not so they can fund women’s sports, but rather so they can pump more money into football.”

In terms of equal amounts of spending on men’s and women’s athletic teams, there is nothing in Title IX that explicitly states schools need to spend the same amount of money on their women’s and men’s sports teams. Instead, its language specifies the difference in spending cannot be as a result of any discriminatory acts. Most all higher education institutions spend more money on men’s sports programs than on women’s.

“Sports are important, but they’re not more important than safety and equality in access to academics and education,” Murphy said.  “Put another way, raped women don’t need more basketballs.”

Stony Brook’s Director of Title IX and Risk Management Marjolie Leonard said the campus community is also often unaware as to how sexual assault is classified and handled. She jointly oversees the SBU Office of Diversity and Affirmative Action.

“What a lot of people don’t know is that sexual harassment is a form of discrimination,” Leonard said during an impromptu interview with different Stony Brook media organizations on Wednesday, Oct.1, 2014. “In the Office of Diversity and Affirmative Action, we address all forms of discrimination so it makes sense that it would be run together.”

Leonard has not been available for an interview since Oct. 1.

Leonard also said she and her department use a relatively new online training “Know Your Rights” program to better educate students. “One of the things that is really important that we have been doing and continue to do with this online training is equipping our students and employees with information and knowledge because a lot of people don’t know what their rights are and responsibilities are,” Leonard said. “They might not know what options we have available to them if they should be the victim of some type of sexual harassment or sexual violence, knowing what resources are available to them.”

The deadline to complete the mandatory training was Friday, Oct. 24, 2014. A hold is placed on the SOLAR accounts of students who do not complete it.

According to Murphy, training is not what will solve these problems on college campuses.

“Schools don’t need ‘training programs’ about consent, and silly experts who ‘teach’ officials how to apply boondoggle policies,” she continued. “They need simple, short and easy to use and understand policies that make it VERY clear that sexist violence is the SAME type of harm as racist violence, and ethnic violence, etc. THIS message, alone, will change things overnight – and the training necessary to make this point clear should be a program where ALL protected class issues are addressed at the same time.”

Students who took the “Know Your Rights: Discrimination and Violence Required Training”—like Ahmed and Szklonicki—had mixed reactions about the survey.

“I thought…that it was kind of a waste to be honest,” Ahmed said. “You ran through 10 slides and at the end they gave you questions.” Ahmed said despite the fact that the slides provided students with information, he “could only imagine that most people didn’t really re-read them.” However, he mentioned the questions in the survey were “good.”

While the survey touched upon some students’ previous knowledge about sexual assault, it also provided new pieces of information.

“I can’t say I learned anything I hadn’t known before. But it cleared up a few things,” Szklonicki said. Prior to the survey, Szklonicki did not know a woman could rape a man. “It’s not something that you would think could happen.”