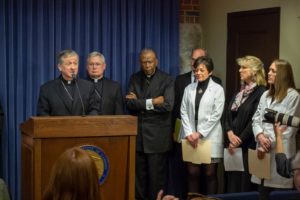 Cardinal Blase Cupich, of the Archdiocese of Chicago, voices his opposition to reproductive health care measures proposed by Democrats during a news conference March 28 at the Capitol in Springfield. He was joined at a news event by each of the five other Illinois bishops, including (from left) Bishop David Malloy of the Rockford Diocese and Bishop Edward Braxton of the Belleville Diocese. Also pictured are (from left) Robert Gilligan, executive director of Catholic Conference of Illinois; MaryBeth Miller, a registered nurse from St. John’s Hospital in Springfield; Joy Newburn, of Catholic Charities of the Diocese of Joliet; and Jillian Stalling, OBGYN at OSF HealthCare in Peoria.. (Capitol News Illinois photo by Jerry Nowicki)

SPRINGFIELD — Illinois’ dioceses have condemned the General Assembly’s passage of an abortion repeal-and-replace measure headed for the governor’s desk.

Both chambers approved the Reproductive Health Act, which proponents and opponents agree will be the most liberal reproductive health care law in the nation, during the final days of the legislative session.

Democratic Gov. J.B. Pritzker said in a statement he will sign the bill.

“In Illinois, we trust women to make the most personal and fundamental decisions of their lives — and now, that will be the law of the land, even as it’s under threat in other states,” Pritzker said.

But Cardinal Blase Cupich, head of Chicago’s archdiocese, said in a statement Saturday that the act’s passage “marks a sad moment in our history as a state.”

“We have worked to make the case for a consistent approach to human dignity in Illinois and will continue to do so even as elected officials single out unborn persons for particular disregard,” he said. “It remains our hope that Illinois will eventually distinguish itself as a safe place that welcomes not only those seeking a new life or second chance, but also the most vulnerable among us who deserve a chance at life.”

Following are the complete statements released by Illinois’ dioceses:

Statement of the Archdiocese of Chicago

The passage of Senate Bill 25, eliminating even the minimal limitations on abortions under previous law marks a sad moment in our history as a State. We have worked to make the case for a consistent approach to human dignity in Illinois and will continue to do so even as elected officials single out unborn persons for particular disregard. It remains our hope that Illinois will eventually distinguish itself as a safe place that welcomes not only those seeking a new life or second chance, but also the most vulnerable among us who deserve a chance at life.

We are resolved to let women and families in the Chicago area know they have alternatives to abortion. We will continue to provide help during their pregnancies and throughout their journey as parents. Our ministry in Cook and Lake Counties has taught us that when teenagers in underserved communities experience an unplanned pregnancy without proper support, the consequences for the health and well-being of mother and child can be grim.

But, we have also seen that a brighter outcome is possible when support is provided. Catholic Charities and its partners serve hundreds of young women and developing families every year. They nurture the mother and therefore the baby by providing classes in health and child development. They encourage the new families toward independence by providing childcare and making referrals for education, housing and employment.

As a young woman, served by a Catholic agency said, “It was like a second family when I came here. My Doula took me to doctors’ appointments, explaining what all the papers and procedures meant, how my baby was developing, the changes my body was going through and how to eat and exercise to stay healthy.”

Today, her son is thriving in the organization’s early childhood program and its family support program helps her stay on track with personal goals. She will begin a bachelor’s degree program this summer. With loving encouragement, she has turned stressful circumstances into a positive, hopeful future for herself and her son.

Women have a real choice when they are given the support they need to bring their children into the world and parent them, supported by a society that truly values them. We will give that support to all who seek it in the hope that by offering them a choice, we will build stronger families and a better Illinois.

The Diocese of Belleville had not released a statement as of Sunday, June 2.

Statement of the Diocese of Joliet

The misnamed “Reproductive Health Act”, Senate Bill 25, is a horrific piece of legislation that will lead to more children dying through the violent act of abortion, even at a point when they are able to survive outside the womb. Science indicates that life begins at conception, and to deny the life of certain human beings at young ages is an attack on human rights. No person’s life should be in jeopardy simply based upon his or her age. Only in the womb do our laws allow some humans to be accorded the full rights of personhood and some not.

Additionally, this legislation is not in the best interest of women as it removes abortion clinics from regulations for serious medical procedures. The Church is committed to upholding the dignity of women but does not believe that abortion is a solution when challenging situations arise. Rather, working towards a society where both mother and child are cared for is the true path of justice and compassion.

I am aware that some of the legislators who voted in favor of this legislation believe that it violates their own conscience. Yet, for them party loyalty, even on such a weighty moral issue, has seemingly trumped conscience.

Abortion is an illogical and inconsistent policy for anyone who stands for human rights. To allow one person to decide whether another person lives or dies is even more capricious than the death penalty or war.

Ironically. as Illinois expands the legal and even constitutional right to abortion, many of its neighboring states have moved to restrict abortion. Clearly, we are a divided society on this issue. The Catholic Church stakes its position on the ultimate belief that God creates every human person and endows each of them with the right to life, liberty and the pursuit of happiness.

The Diocese of Peoria has not released a statement as of Sunday, June 2.

Statement of the Diocese of Rockford

Today is a dark day in the history of the State of Illinois.

Health Act, that body has declared that abortion in Illinois is a fundamental right. This legislation strips the unborn of any protection or rights under the law, and demonstrates a grievous disregard for the care and human solidarity we owe to the most vulnerable among us.

This legislation disregards the advances of science that demonstrate the development and the shared humanity of unborn children. In the face of this reality, our State will allow abortion at any time during the 9 months of pregnancy for any reason. It also mandates the cooperation of those who support the gift of life by requiring all insurance plans subject to regulation by the State of Illinois to cover abortion services.

This action takes us one step further down the path which devalues our shared humanity and the dignity we bear as human beings from our creation. The State of Illinois and we as its citizens are better than this.

I thank all who have called, written or visited their legislators to express opposition to this terribly misguided legislation. I urge that we continue to pray, to lobby and most especially to teach our children, the next generation, that respect for the right to life must be rebuilt and reclaimed in the years to come.

Statement of the Diocese of Springfield (This statement is in response to the House’s passage of the Reproductive Health Act on May 28. Andrew Hansen, Bishop Paprocki’s spokesperson, said this is the relevant statement to use in response to the Senate’s approval of the measure as well.)

“I condemn the gravely immoral action of the Illinois House of Representatives in passing Senate Bill 25, labeled with a highly misleading title as the ‘Reproductive Health Act,’ purporting to declare abortion a fundamental right.

“Christians have rejected the practice of abortion from the earliest days of the Church. Children are a gift from God, no matter the circumstances of their conception. They not only have a right to life, but we as a society have a moral obligation to protect them from harm. Legislation that deprives children of legal protection before they are born, allowing for the murder of children at any stage in the womb, even up to the moment of birth, is evil.

“I pray for our state legislators, entrusting them especially to the intercession of Saint Thomas More, a public servant who preferred to die at the hands of civil authorities rather than abandon Christ and the Church. May we also keep unborn babies and newborn infants, as well as all mothers, in our prayers and work to improve the dignity and quality of life of all people, especially the most vulnerable.”