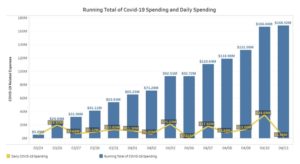 The comptroller’s office introduced a new tool for tracking state COVID-19 spending this week. As of Monday, the state had spent nearly $170 million on associated equipment. (Credit: Illinoiscomptroller.gov)

SPRINGFIELD — The state of Illinois spent almost $170 million on cleaning supplies, face masks, gloves, thermometers and other supplies to battle the novel coronavirus in roughly three weeks, according to data from the comptroller’s office.

Since March 24, the state submitted 64 orders for personal protective gear, ventilators and other essential equipment from companies including Costco and Menards.

Comptroller Susana Mendoza’s office published an online tool showing all purchases — including the amount spent and product obtained — in an effort, a spokesperson said, to increase transparency.

“I hope our online portal showing Illinois’ investment in fighting this deadly virus will help drive home the message that none of this should be taken lightly and that people need to stay at home and stay safe,” Mendoza said in a statement. “As long as this unprecedented public health crisis continues, my office will prioritize payments for the tools and supplies our frontline health care workers need to protect themselves, their patients and our communities.”

The greatest single-day expenditure came April 10, when the state spent $34.69 million on goggles, face shields, gowns, post-mortem bags, clip boards, testing equipment and other goods. Over $7.45 million was spent that day on ventilators.

The running total of state resources invested was $168.52 million as of Monday.

Gov. J.B. Pritzker, in nearly each of his daily COVID-19 update briefings, has stressed the importance of protective equipment for health care personnel, first responders and other essential workers, as well as ventilators for those in hospitals’ intensive care units.

“We are acquiring whatever we can so that we are ready in the event that there’s a spike in ICU beds and need for ventilators,” the governor said at his Tuesday COVID-19 briefing.

He also said again that the federal government long ago should have taken a more active role in procuring protective gear and equipment.

“What I would say is that this is the market that every state has been thrown into – this is what I’ve been talking about for a month now – that had the … president put in place the Defense Production Act to help us with all of these items, we wouldn’t be paying $5 or $6 sometimes for an N95 mask that in a normal circumstance costs 85 cents or $1,” he said.

He said the same was true for ventilators, which generally cost $25,000 to $40,000, but the state is paying more for them and bidding against other states and the federal government.

Pritzker said his administration plans to give a budget update later in the week, but the hundreds of millions in added spending, combined with economic fallout from the pandemic and associated stay-at-home orders, will create a “very, very difficult fiscal financial challenge for the state of Illinois.”

He said more aid will be needed from the federal government above and beyond the $2.2 trillion CARES Act that has already passed.

“It’s one of the reasons why I think all of us should be communicating with our federal representatives here to work hard to get the government in Washington, DC, to help all of the states because we really have this problem in common with all the states,” he said. “You hear governors say this all the time. We have big holes in our budgets as a result of what’s happened with COVID-19. It’s nobody’s fault, it just is where it is and we’re going to have to deal with it.”