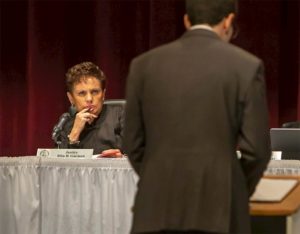 Illinois Supreme Court Justice Rita Garman listens to oral arguments being made by Assistant Appellate Defender Zachary Rosen in the People v. Morger case Sept. 18 at Lewis and Clark Community College in Godfrey during a public event held to “raise the profile of the judicial branch.” (Credit: Illinois Supreme Court)

Conrad Allen Morger was convicted of sexually abusing a minor and sentenced to four years of probation by a court in McLean County. That came with a binding condition he not use specific internet sites, such as Facebook, Twitter, Instagram and LinkedIn.

During oral arguments, held in September in Godfrey, Morger’s representative said the ban is a violation of the U.S. Constitution’s First Amendment fundamental right to freedom of speech.

“Certainly I recognize that there is a government interest here, in helping to rehabilitate offenders, in reducing recidivism, and of course keeping our communities safe, particularly our most vulnerable members of our community — children. But as the Illinois statute is written, it doesn’t meet all of those goals,” Zachary Rosen, assistant appellate defender, said.

The Illinois Supreme Court agreed in a unanimous decision among the six participating justices. Chief Justice Anne Burke “took no part in the consideration or decision of this case,” according to the opinion.

The justices analyzed Illinois’ law by considering whether the mandatory social media ban is “reasonably related” to the goal of probation — which is rehabilitation.

Morger was a teenager when he committed the crimes and did not use the internet, Justice Lloyd Karmeier wrote in the decision.

When Joshua Schneider, the state’s representative, was asked during oral arguments how barring Morger’s access to certain websites would help him reintegrate into society, he said the mandatory probation condition would erase the “temptation to reoffend.”

The court ultimately decided the “protective value” of a prohibition on access to certain websites does not outweigh “the impairment to the probationer’s constitutional rights,” including those to freedom of speech.

Karmeier noted the statute does not make an exception for a justifiable use of social media websites by a convicted sex offender at a time he or she could be supervised by a probation officer.

In a footnote, he added he and his colleagues were “not persuaded that [the law] provides rehabilitative value … that outweighs, in many circumstances, its detriment to rehabilitation.” Instead, Karmeier wrote, counseling and treatment might be better options to “more likely ensure successful rehabilitation.”

In an emailed statement, a spokesperson for the attorney general’s office said, “We are reviewing the decision.”

Rosen did not return a request for comment Thursday.