Published by Capitol News Illinois on May 17, 2019 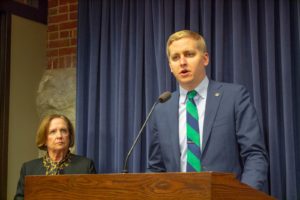 House Deputy Minority Leader Tom Demmer, R-Dixon, speaks along with Rep. Norine Hammond, R-Macomb, during a news conference May 9 at the Capitol in Springfield. In a letter to colleagues today, Demmer criticized Gov. J.B. Pritzker and the Democrats for not working together on a budget plan. He also reiterated the House GOP’s assertion that a balanced budget can be passed without adding new taxes. (Capitol News Illinois photo by Jerry Nowicki)

SPRINGFIELD — Illinois House Republican leadership will brief their members Monday on a balanced budget proposal which they say the governor’s office won’t listen to, according to an internal caucus memo obtained by Capitol News Illinois on Friday.

“While Governor Pritzker has been occupied hosting cocktail parties, the House Republican Caucus budget team has been working diligently to ensure we are on sound footing offering a budget plan that doesn’t rely on additional tax increases on Illinois families and small businesses,” Deputy Republican Leader Tom Demmer, of Dixon, said in the memo.

Jordan Abudayyeh, a spokeswoman for Democratic Gov. J.B. Pritzker, however, said the governor remains in contact with Republican leadership.

“The legislative leaders of both parties are in regular contact with the governor himself and staff. As negotiations continue on a variety of issues, the governor is happy to meet with leaders in the format they prefer,” she said.

On Thursday, Demmer said bipartisan House working groups which include representatives of the governor’s office have been meeting throughout the legislative session to identify cuts of 6 to 10 percent across state agencies—cuts that Demmer said are largely no longer needed due to increased revenue estimates.

The last meeting between the governor and all four legislative leaders, however, occurred on April 11.

The memo carries the same tone taken by the House GOP in a pair of news conferences in which they claimed greater-than-expected April revenues allow for a balanced budget that is not reliant on new taxes.

That unexpected April revenue totaled $1.5 billion and led government financial forecasters to up their fiscal year 2020 revenue estimate by $800 million.

The House GOP said the added revenue estimates, coupled with new revenue streams from Pritzker-backed proposals, will eliminate the prospect of “draconian cuts,” the idea of which they believe Democrats are using to sell tax increases such as a graduated income tax to the public.

“By increasing wagering options in Illinois and enacting an agreed-to assessment to our Medicaid Managed Care Organizations, we can expect an increase of approximately $962 million in FY20 over FY19 expenditures. All without new taxes on Illinois families and small businesses,” Demmer said in the memo.

Democrats have disputed the Republicans’ $1 billion estimate for revenue that will be made available by the managed care assessment. Pritzker’s office budgeted for only $390 million in general fund revenue relief resulting from that proposal.

A one-page summary of the House Republican budget also includes a one-time fund sweep of $375 million from an income tax refund fund, as well as $175 million from a Pritzker-backed plan to incentivize the payment of delinquent taxes. The proposal also includes $212 million in revenue from a state sports gambling expansion.

“Republican leadership probably needs to be checking with their colleagues because as far as I know Republicans have been in all of the budget working groups that have been meeting both on the budget and on capital. I don’t know why they’d feel like they’ve been excluded,” Brown said. “I know the governor is talking with Republicans, so I’m not really clear what they’re being left out of. I don’t really think there is anything but we’re always happy to have their ideas and, hopefully, their support for the budget that gets put together.”