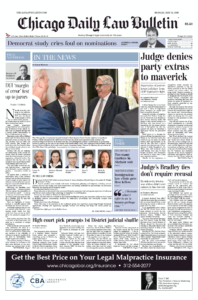 The Chicago Daily Law Bulletin published this piece in print on Monday, May 21, 2018. The jump is below.

Published by the Chicago Daily Law Bulletin on May 21, 2018

SPRINGFIELD — A federal judge has turned back state Sen. Sam McCann’s gambit to get back a share of Republican party resources he claims have been wrongfully diverted.

Citing the doctrine of legislative immunity, U.S. District Judge Andrea R. Wood last week declined to force Senate minority leader Bill Brady to allot caucus resources to McCann, who was elected as a Republican for the Senate district west of Springfield but who has angered the GOP caucus by launching a third-party bid for the governor’s office.

Wood wrote in an 18-page decision on Friday that state law gives Brady, as the minority leader, discretion to use his share of a $20.6 million staff appropriation as he sees fit. She also cited a federal appeals court decision out of Pennsylvania in 2003, Youngblood v. DeWeese, that held decisions about staff funding were akin to other budget decisions that lawmakers are entitled to make, even if they were arguably punitive. 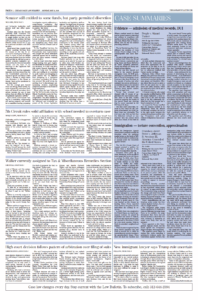 “Similar to the legislators in Youngblood, Brady allocated the [r]esources pursuant to the authority granted to him by Illinois statutes and Senate rules,” the judge wrote. “Brady’s decisions regarding how the [r]esources should be designated for the benefit of the various Senate committees and members, including McCann, falls within the sphere of legislative activity properly protected by legislative immunity.”

McCann had argued that Brady and the Senate Republican Caucus violated his constitutional rights to free speech and freedom-of-association, as well as his due process rights, by denying him the perks because he took positions at-odds with the party.

But Wood declined his request for a temporary restraining order that would have forced Brady to allow him access to things such as bill summaries, staffers to help him track and file legislation and communications and photo staff, funded by part of the $20.6 million budget line for “ordinary and incidental expenses of the Senate legislative leadership and legislative staff assistants and the House [m]ajority and [m]inority leadership staff, general staff and office operations.”

Another state law, the General Assembly Staff Assistants Act, gives legislative leaders the power to assign staffers as they see fit. According to the decision, McCann still had access to a separate pool of $73,000, which allowed him to pay for a personal assistant and other services.

Wood noted that, despite Brady publicly expelling McCann from the caucus on the day he announced his third-party bid for governor in April, he had not alleged he had been expelled from the Senate itself and that he still had access to publicly available legislative services such as the General Assembly website and the team of researchers at the Legislative Reference Bureau.

Wood wrote that the legislative immunity doctrine stems from the U.S. Constitution’s protection of legislator speech and debate under Article 1, Section 6, which states that discussion in the House or Senate “shall not be questioned in any other place.”

But the concept goes beyond those two things, Wood added, because it generally immunizes local, state and federal lawmakers from private lawsuits for any of their actions that are within the “sphere of legitimate legislative activity.”

Such actions could include “voting for a resolution, subpoenaing and seizing property and records for a committee hearing, preparing investigative reports, addressing a congressional committee and speaking before the legislative body in session,” she wrote.

The judge added, while the concept is not all-encompassing — lawmakers are not immune from suits over their political activities, or disseminating classified or libelous material — the situation here is almost identical to the one in the Youngblood case, which came out of the 3rd U.S. Circuit Court of Appeals.

In the Youngblood decision, the panel considered arguments from a Pennsylvania state representative who alleged two other lawmakers retaliated against her for breaking from her party leaders, violating her civil rights.

But the court wrote that state’s budget-making laws gave legislators flexibility in making staff funding decisions. As is the case here, that state’s General Assembly allocated a lump sum for district office and staffing to be controlled by party leaders and delegating to party leaders was “no different than delegating to a legislative committee completing the allocation process,” the panel wrote, describing it as “a discretionary policymaking decision implicating budgetary priorities of the House of Representatives.”

Wood called the logic “informative” for McCann’s case, noting the Illinois Constitution tasks the General Assembly with making appropriations. The $20.6 million for staffing was specifically designated for “ordinary and incidental expenses of the Senate legislative leadership and legislative staff assistants” and that about 26 percent of it was specifically given “to the Senate [m]inority [l]eader for such expenditures.” The staff assistants act also specifies that one-half of the assistants designated for the Senate are under the purview of the minority leader.

McCann does not take issue with Brady’s authority to use the resources as he sees fit “so much as he takes issue with Brady’s motivation for doing so,” Wood wrote. “And as noted above, legislative immunity turns on the function being carried out by the legislator, not his motive or intent.”

She also added, although McCann claims he’s still technically part of the caucus until he officially creates his new party, the Conservative Party, “[i]t cannot be said that McCann’s treatment is tantamount to being expelled from the Illinois [s]tate Senate” as he had claimed. He has not alleged that he cannot vote, participate in debate or introduce legislation, the judge noted.

McCann’s claim thus could not meet the first standard for getting a temporary restraining order — showing that his claims have a likelihood of success on merit.

“In sum, having found that Brady’s alleged conduct falls within the sphere of legislative immunity, the [c]ourt dismisses the claims against him with prejudice and denies [p]laintiff’s request for a temporary restraining order against him,” Wood concluded.

In a statement today, McCann went after Republican Gov. Bruce Rauner — who funded a 2016 primary challenge to McCann after the senator voted to override one of his vetoes of a labor-backed bill —and “his Republican Party” for “hiding behind immunity to try to silence me.

“[B]ut every attempt to weaken me and attack my constituents shows the [p]arty’s need to resort to desperate tactics to protect its dwindling hope in November’s election,” he said, adding that “Rauner and his allies can attack me, but they won’t stop me and every attack only solidifies Conservative voters against him and coalesces voters behind me.”

McCann is represented by Dale D. Pierson, an attorney in the legal department of the International Union of Operating Engineers, Local 150. The department said in an e-mail today that it “is reviewing Judge Wood’s decision and will discuss various options moving forward with Senator McCann.”

A spokeswoman for the attorney general’s office, which represented Brady in the case, declined to comment.